Any book on embroidery will usually tell you about methods for transferring designs to the fabric. In fact, I think some of them are guilty of plagiarism – although from whom, in the best traditions of the circular firing squad, it would be hard to know.

Last week there was a discussion on Twitter relating to the Great Lady’s Magazine Stitch Off and particularly concerned with transferring the design once you’d chosen it, and I suddenly realised that not one of my shelf (ahem, shelves!) of embroidery books actually suggested which method might be most appropriate when, or what hazards or difficulties they present.

First, Prick and Pounce. This is one of the oldest methods – almost certainly the only one available to the Lady’s Magazine subscribers. I’ve come to it relatively recently, but I use it a lot. It’s not good when my tennis elbow flares up, because pricking holes in the pattern is a slow and repetitive business, perfectly designed to produce a repetitive strain injury. It’s also not good – as I discovered with the pashmina for the Stitch Off – with a mobile fabric which is a little widely sett for the thickness of the constituent yarns. I had to reinstate the lines with a dressmaker’s chalk, which wasn’t nearly as precise as I would have liked!

Next, the Light Box method. Actually, not having a light box, it’s a “tape it to the window and do your best” method. I did this with the Gentleman’s Glittering Nightcap, and it worked fairly well, but it’s limited to the size of your window or lightbox, whereas Prick and Pounce is limited by the size of your table! I also become nervous when using indelible ink such as the (recommended and provided) Pigma pen. I’m always terrified of inadvertently drawing a line somewhere I can’t cover it.

Which leads me on to a caution. I’ve used quilter’s “disappearing” felt pens instead in the past, and had one of the scariest embroidery experiences I’ve ever had. First of all, the lines didn’t last quite long enough for a hand stitcher, and then…

When I washed the piece, the lines reappeared, and what’s more, they kept coming back. I can’t remember what it took to be rid of them, but certainly some prolonged soaking in detergent was involved.

Hair-raising doesn’t begin to describe it, and as mine is nearly a yard long, that’s no joke!

I used a Transfer Pencil for the Map of Amarna. This works nicely – provided you remember to reverse the pattern if it needs it! – if the fabric is a natural fibre. However, it can be hard to keep the transfer clean as you make it, and then there is a risk that you will transfer indelible smudges to the fabric.

I’ve also found that the lines sometimes spread as they transfer, which may or may not be a problem, depending on how detailed the design, and how much unembroidered fabric may be showing. As it always says on the packaging – test the whole process on your fabric before using it for anything important!

In the case of a really tricky fabric, such as the velvet for the Camberwell Panel, Running Stitch through tissue paper works really well. It’s rather time consuming, but then, I don’t think any method is especially swift.

There are soluble fabrics which I know many stitchers recommend, but I’ve only worked one piece using it, and the design drawn on the soluble film was hard to see, so I can’t describe it as an unalloyed success.

In truth, a stable natural fabric such as linen will probably happily accept anything thing you do, and the fragile, “difficult” ones will each require a different response. The trick is to remember to pause before starting, to make sure you pick a sensible method for the fabric and the design! 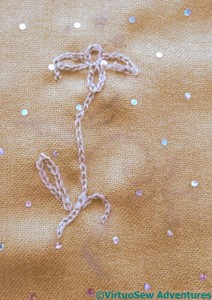 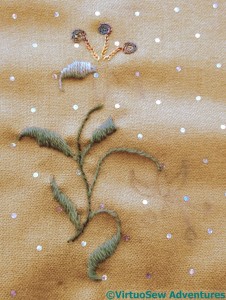 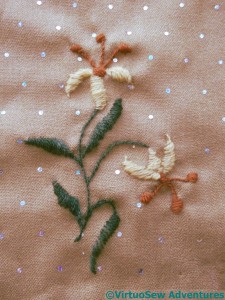 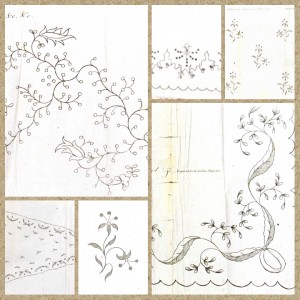