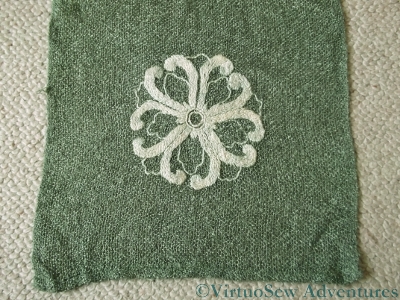 This is a long rectangular scarf  in a very open weave, woven using a textured yarn. I bought it on the high street, but decided to embellish it somewhat. At the time I was fed up with embroidered pictures and wanted to embroider something useful. Life no longer being leisurely enough to require a huge stack of teacloths or placemats, clothes seemed an obvious choice.

I also wanted to play with a soluble fabric. Soluble fabrics are usually used for machine embroidery, but naturally I had other plans!

The embroidery thread was one of the Caron Collection three-stranded cottons – from the Watercolours range, I think, and the design is based upon a Chinese heraldic badge depicted on one of the designs in “Traditional Chinese Designs: Iron-on Transfer Patterns”, produced by Dover books. Of course I didn’t iron it on…! 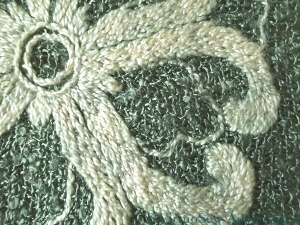 As you can see, most of the design is worked using closely packed long and short stitch, with the thin lines worked in double running stitch. This makes the design close enough to reversible to cope with the odd gust of wind when I’m wearing it!

You might be wondering what use the soluble fabric was. It was very useful in fact, because it allowed me to put stitches in the middle of holes in the weave of the scarf without them pulling to the edge of the hole before I’d locked them in place with the next row of stitching. The stitch length is pretty constant throughout the piece, and that’s because my stitch placement wasn’t undermined by the base material.