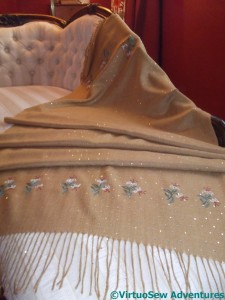 The Small Motifs end of the pashmina

If I were writing a report card for myself, I would write: Rachel has made a good attempt, but continued application is required to produce excellence.

Finally, after much muttering, wrangling, and stitching, I have finished the pashmina I decided to embellish as a part of the Great Lady’s Magazine Stitch-Off. I’ve washed it (carefully, by hand) and pressed it (carefully, on a cool wool setting) and photographed it draped over my parents’ settee, which isn’t the right period, but does make a lovely backdrop..

Time alone will tell whether it is a practical piece that I enjoy wearing and don’t spend all my time repairing, but for now I am pleased. Although I must admit, rather more of the little paillettes flew off in the course of the stitching than I was expecting. It will only be dotty in patches! 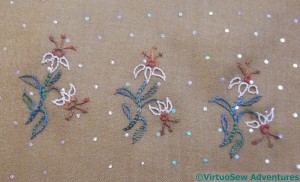 One end has a row of motifs, all the same size, and worked purely in outline. Primarily I have used stem stitch, although split stitch and chain stitch both make an appearance, too.

The small motifs were fairly quick to stitch, and didn’t require much self-discipline because I could see the progress I was making. I’m not good at repeated motifs – I lose interest quickly – so this was very good news. 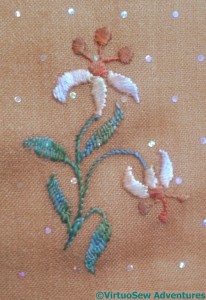 One of the large motifs

At the other end, the motifs are larger – in two different sizes in fact, two larger ones interspersed with three slightly smaller.

The larger motifs used a wider combination of stitches. Stem stitch for the stems – naturally! Satin stitch for the petals, worked over a split stitch outline, and using three strands of the stranded silk thread instead of two. It might have been better to use four, in terms of the coverage, but that would entail larger holes in the fabric, and I wasn’t willing to do that.

The leaves are worked in Romanian Couching, using the couching stitch to create a vein up the centre. Since the green thread is an unspun, indeed untwisted floss silk, it spread nicely. It has also got a mind of its own and unstitches itself unless finished off with great thoroughness.

One of the reasons the researchers wanted to extend the stitch-off project was to see whether they would gain any insights from it into the lives and work of the readers of The Lady’s Magazine. One thing I’m sure they will be reminded of anew is that the designs may be the same, but the treatments so different as to render them almost unrelated in appearance. 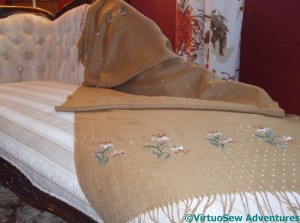 The Large Motifs end of the pashmina

As I said in my earlier post, I have a renewed respect for any lady who embroidered her own silks and muslins, but I should also highlight something I believe we are inclined to forget. I’m sure the general standard of embroidery was good – it was an expected accomplishment, after all, – but I don’t believe it was all as breathtakingly exquisite as what we see in some surviving pieces.

Textiles were extremely valuable until quite recently. They were reused, altered, left as bequests. The pieces that remain are either fortunate accidents of history (a forgotten trunk in an attic, say) or they were so remarkable as to be treasured. Embroidery worked at home for a day dress or other garment would have been worked quickly so that it could be worn, and in due course the dress cut down into something else, and finally, no doubt, sent for rags. The little aprons which protected expensive wool and silk dresses had to survive the washing of the day – pounding in a tub of boiling water – and again, when they could no longer be made respectable, became cleaning rags.

I wrote an entire post about transferring designs, but again, drawing was an expected and widespread skill. Many of the readers may have simply copied the design freehand onto their fabric, unconcerned about pinpoint accuracy, aiming only to provide an approximate guide for their needle. These are skills no longer as widespread, and we trust ourselves less than they would have done.

This isn’t evidence of one of my finest hours, but it is a perfectly competent piece of work, perhaps in the traditions I have just described, of work done quickly for a particular occasion or event. I am going to send it to Chawton House as a contribution to their exhibition celebrating the 200th anniversary of the publication of Jane Austen’s “Emma”.