Dealing with the Golden Acorn 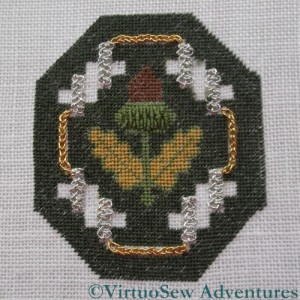 You last saw the Golden Acorn in July, when I was thoroughly fed up with it.

Since I’d got so engrossed in stitching that I’d neglected to pay attention to the details and had to unpick the lot, when I came to re-stitch I decided to put in the braid stitch in silver first.

I found the silver to be a more temperamental thread than the gold, although structurally it was exactly the same. However, these threads are all made more or less by hand, and must be hugely susceptible to temperature and humidity.

I know from my textile technology studies that natural fibres – such as cotton, wool, and silk – are susceptible to environmental conditions, because the basis for the success of the Lancashire cotton industry was due in no small part to the fact that ideal conditions for growing cotton are far from ideal for turning the cotton into cloth. In fact, nowadays, textile factories are built with climate control, because the speed of modern production demands that all possible variables be thoroughly ironed out.

In the same way, if you visit a woollen mill, you will see piles of wool at various stages of production, just sitting there. If you are a time-and-motion person you’ll get very uptight about this, and talk about “Just In Time” manufacturing – only to be told, in no uncertain terms, that if you want to pay for all the failed batches that will result from not allowing the wool to relax (technical term – yes, honestly) between processes, you’re welcome, but the manager won’t let it out of the factory with their name on it.

The silver and gold threads we are using have natural fibre cores, so sensitivity to climate is only to be expected! 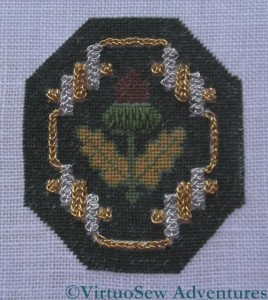 I found both of the two main stitches in the strapwork, Ceylon stitch and Braid Stitch, rather troublesome in metal thread, although Braid Stitch in pearl cotton  is one of my favourites. There’s no denying that they produce a rich and exotic effect once they are in place, though!

I became slightly fed up with tent stitch – there was such a lot of it! – while I was working this, so I’ve been giving myself some time away from it. I’ll get started on the next one of these when I feel ready for fine tent stitch again.

I’m also waiting until all three are stitched before I decide which to finish to create which stitching accessory. If I recall correctly, there’s a scissors keep, a needlecase, and a pincushion. I suspect they’ll end up in that famous Winter Decoration Corner I keep threatening to do! 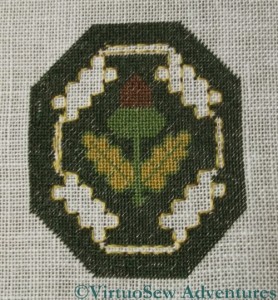 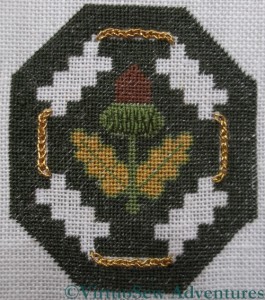 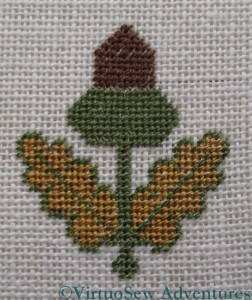 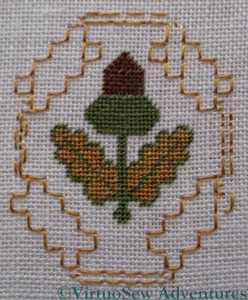 Beginning on the Golden Accessories 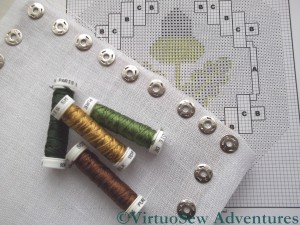 The Golden Accessories is a set of bonus instructions for three needlework accessories which was supplied with the Tudor and Stuart Masterclass, and now that the Petite Pincushion is finished, I’m starting on the first of them.

The silk work seems to be entirely in tent stitch, so, although the fabric is very fine, it will be simple enough to work. The cold snap at the beginning of the year has roughened my hands, so the silk sometimes catches a little – but in fact, surprisingly little, and at least the wristwarmers make stitching possible at all! 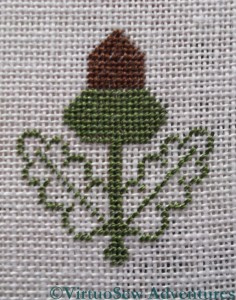 I’ve been fortunate, since the weather has been kind, giving me good light to stitch by. So good, in fact, that the first two colours seemed to be stitched in no time at all, leaving me positively flabberghasted by my progress. Strange to say, although tent stitch has never been a favourite of mine, I’ve thoroughly enjoyed starting work on the Acorn – I think it is something to do with the silk thread, which is just gorgeous to work with! 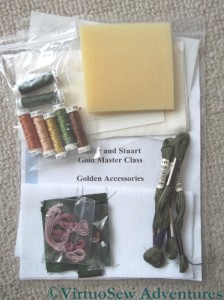 There was a set of Bonus Instructions in the instructions for Month Fifteen, from a teaching project that Tricia had retired from use. She was asked whether she’d produce kits of the materials for those of us who don’t have easy (or even difficult!) access to a really good needlework shop. Yet again, apparently, demand outstripped her expectations (a good problem to have!), and here is my kit.

It includes finishing materials for the various accessories, as well as the fabric and the silk thread, but not the metal thread, since all of us already have large spools of that from doing the main Spot Sampler.

My intention is to finish these to add to that planned “winter decoration corner” I’ve mentioned a couple of times. I’ve found some masks which I’m going to decorate in silver and gold, and I will use some metallic gauze or something similar for the background. Already the two Needlework Nibbles, the Floral Glove Needlecase and the Tudor Pincushion look like they will create some wonderful reflective textures for a dark corner…