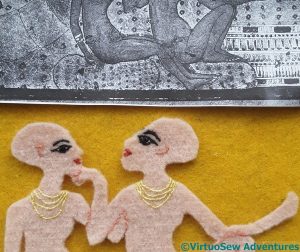 A little while ago, the Ashmolean Museum tweeted another reproduction of that fresco of the two little princesses, this one in black and white, and it brought to the fore something that had been less clear in the colour reproductions I had seen – the girls are actually sitting on cushions. Originally, I had interpreted the lowest border design as fabric covering a divan of some sort, but now I found myself developing some possible cushion fabrics.. 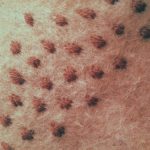 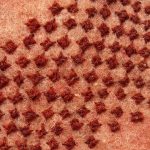 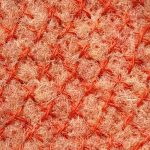 Once again, as with the drapery, I stitched patterns with additional needlefelting in mind. I decided in the end that the satin stitch spots weren’t working very well. Sorbello stitch is the stitch I used for the villages on the Map of Amarna. It’s another stitch I rather like, as it produces a neat, square stitch, with an interesting texture – more obvious with some fabrics and threads than others, of course. The cross stitch spots are in a colour closer to that of the felt, and should produce a more subtle effect.

What I have done is to stitch the patterns on a section of felt, and then pass it under my embellisher. I hope that this will create enough fibre entanglement that when I cut out the cushion shapes, the stitches will not unstitch themselves.

I wonder whether it will work…!