The Map of Amarna is Finished – Part Two 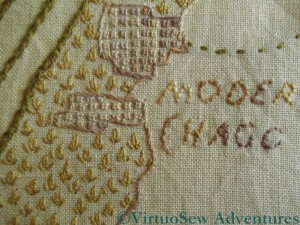 Detail Of Villages And Cultivation

Regular readers will recall that I spent a long time thinking about the stitch I intended to use for the cultivation, and not just that, but selecting the appropriate thread or threads to use for it. In the end I chose tête de boeuf stitch for the cultivation (upside down in relation to the diagram on the page I’ve linked to, making it look more plant-like) , and although you can’t see it in this photo (zoom in on the main photo on the first post on the completed map  instead), I used four different fine silk threads  to create changes of colour and effect, reminiscent of different crops.

For the modern villages, I used a variegated silk thread, which I used for the text relating to those villages as well, and chose Sorbello stitch, stitched very small, and very regularly spaced. It’s unlikely in the extreme that any rural village, anywhere in the world, would be laid out in a grid pattern, but again the intention is to create a marked textural contrast between the cultivation and the settlement. 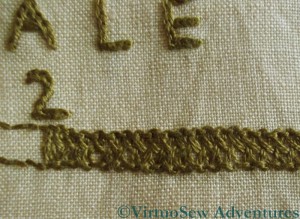 Working the scale for the map gave me some trouble. For the text, again I used split stitch, as I had on the second level title, and eventually I chose to use an interlaced stitch for the dark sections of the scale.

This stitch echoes the reverse herringbone stitch I used for the contour lines. I know that most of the people who see this when I eventually finish it won’t appreciate that sort of detail, but there will be some who will! 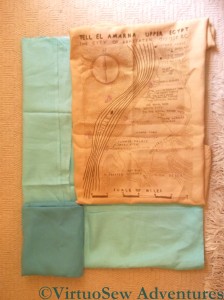 This was the point at which I laid out my finished map on the floor with the other fabrics which I intend to use for the borders, and gave myself a serious fright.

Remember these diagrams in my post in August 2010? These borders are where the “patches”, like the Felucca and the Faience Hippopotamus, will go. Of course this is very approximate – I don’t intend to cut into these fabrics until I’m much more sure of how I’m going to put the pieces together than I am at present – but these borders are about the right proportions, and as it stands they aren’t going to leave much space for the patches.

I may have to edit my patches and fragments very much more ruthlessly than I had intended.