More Slow Progress On The Crock Of Gold 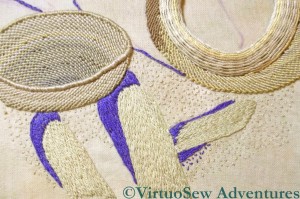 Progress On The Sticks

I have been making progress on the sticks and the ground around the Crock and Lid. The speckling seed stitches are getting done in stages, rather as I tackled the (much bigger) job of the tête de boeuf stitch on the Map of Amarna.

The sticks are now all done, but in spite of the pattern of the shadows, they look a bit too flat. Somehow the pattern of dark and light is too undifferentiated. 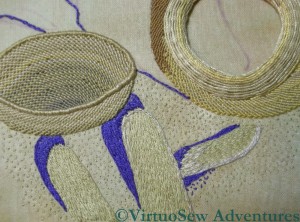 So I have added some highlights here to two of the sticks. I’ve used the same stitch – split stitch – and simply stitched over the top of the first layer. It’s tricky, because in addition to the two layers of fabric, there are two or three layers of thread to get through. Nor am I entirely sure that it is giving exactly the effect I wanted.

Still, there is still much speckling still to do, not to mention the shadows of the pot and the lid. That will give me time to think a bit longer, and plan a bit more.

For those in the UK who missed the previous broadcasts of “The Man Who Discovered Egypt”, it will be re-broadcast over Christmas – BBC4, on Thursday December 27, at 7pm.