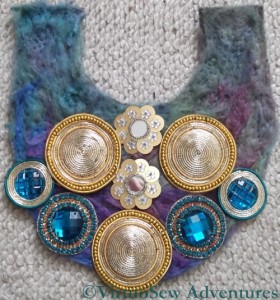 Laying Out The Large Elements

Once I had decided which of the score or so of arrangements I was going to create, I laid out the large elements on the needlefelted felt and tweaked the design a little more.

The gaps will be filled in with little flower gems and seed beads, so I ended up spacing out the large elements a little more. Then I had to work out how to sew them on. You see, unlike the original design in the magazine which had used oversized sew-on gems with no settings, I had ended up buying a selection of bead-and-purl assemblages from Aarti J’s and Bombay Fabrics. They weren’t quite as straightforward to sew on, and they certainly couldn’t be temporarily attached with safety pins, lest I break or crack some of the check purl.

Sewing on the large gems was several evenings’ work, as it turned out, using a fine but sturdy needle and being careful where I placed it. Still, each assemblage is backed with stiffened muslin, so in some cases it was relatively easy to stitch through the muslin and avoid the beads. In other cases the thread snagged on the front of one gem while I was working on another!