More spots on the Spot Sampler 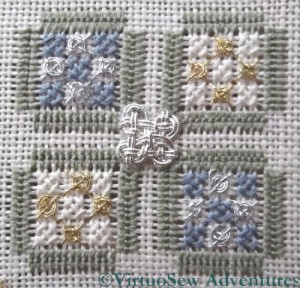 Even the macro setting on my camera has trouble with some of the fine detail here. The fine gold and silver threads used for the four-legged spider’s web stitches is barely heavier than the silk thread, and was quite a challenge to stitch with. At true size they create the smallest of subtle glimmers, rather than any dramatic effect.

The square interlacing stitch, on the other hand, makes its presence felt in no uncertain terms! It was fun to do, although using the heavy silver thread I did wonder whether the interlacing was going to create rather a congested appearance. I don’t think it does, but if there is one thing I have learnt from this course, it is “Test, Test, Test”. It is all very well being confident of how to work the stitch, but with the huge range of metal threads available and the variants of scale and flexibility, it’s much harder to be confident of the final effect if you don’t test it on the right fabric at the right scale! 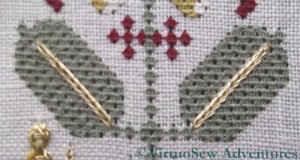 The two rows of heavy chain stitch here are worked with different threads. The difference is subtle, and harder to see on the photo than in real life, because even the fact that the row of stitches are at different angles contributes to the effect. I’ve found heavy chain stitch a remarkably difficult stitch to work using metallic threads, and I’m not sure quite why, because I don’t find it at all difficult using cotton or silk!. I am assuming that it is a matter of tension, but since my various efforts haven’t cracked it yet, all I can say is “Needs More Work!” 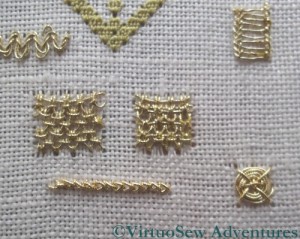 An Array Of Spots

Here you see a whole range of spots, worked with varying degrees of success.

I’ve had plenty more practice with Ladder Stitch since I worked this set, but I still find that one side of the stitch ends up appearing “turned over” compared with the other, which lies flat.  Another stitch that needs more work…

I like the dense fabric produced by the two variants on Up-And-Down Buttonhole Filling, although strangely they don’t look as different from one another in the photo as they do in real life.

Eight-legged spider’s web stitch is more stable than the four-legged version – there are more stitches to keep it under control – and it produces a good, flat boss. It would probably be a good choice in places where the square interlacing stitch would draw too much attention to itself!