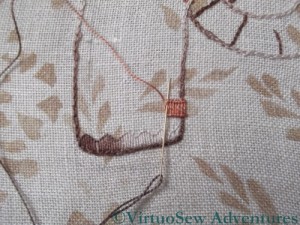 I’ve been struggling to decide what to do with the anklets for the Elephant of Infinite Charm. When I look at the  Elephant without anklets it’s clear the design needs more visual weight lower down in the design, but when I asked the Elephant what sort of anklets he wanted, he just humphed at me. For days!

Now, however, I think I’ve cracked it. And one of the really pleasing things about the idea is that it helps me to practice my Ladder Stitch, which I’ve been struggling with for the Tudor and Stuart Goldwork Masterclasss. It’s easier in silk, partly because I’m not quite as conscious of the expense of the thread (I can’t believe I just wrote that!), and partly because the thread slides over itself more easily. 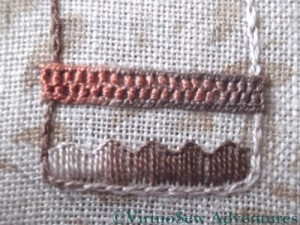 So here is my choice – ZigZag on Ladder Stitch. It adds a bit of patterning and structure , but it’s not out of scale with the Elephant or with his feet. The only slight difficulty is that because it it a complex stitch on top of a fairly complex foundation, it’s not exactly lightening-fast. Still, I’ve got one done, and the Elephant isn’t humphing anymore. When I’ve done both, I will need to decide whether to put a second anklet further up the leg. The original ceramic version does, but then in the ceramic version the anklet is smooth…