The Elephant Of Considerable Charm 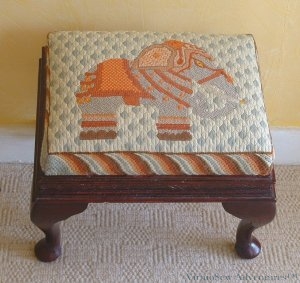 The Elephant Footstool in canvaswork

I don’t confine myself entirely to surface embroidery. I’ll give most things a try, and needlepoint is fairly high on the list of things I enjoy.

This is the second footstool I made. The first one, which I made for Grandmama, was an adaptation of  a design from the Reader’s Digest Complete Guide to Needlework, but I designed this footstool for my mother after we had Grandmama’s in the house for a while, and she decided that she really liked Putting Her Feet Up Properly. 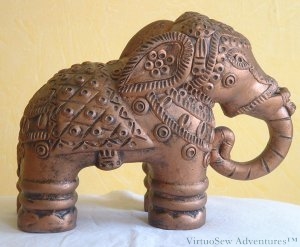 An Elephant Of No Distinction But Infinite Charm

There are several elephant ornaments in my parents’ living room, but the inspiration in this case was a glazed terracotta elephant which we call the Elephant Of No Distinction But Infinite Charm (to distinguish him from the Elephant of Considerable Distinction, who joined the family much earlier, when I was still a child!). I thought his decorated saddle cloth and harness simply cried out to be rendered in canvaswork of some description, and thought it would be fun to try. 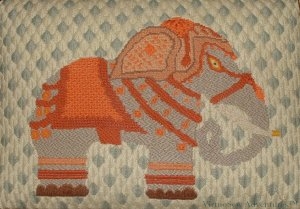 The Elephant In Canvaswork

I used two strands of Paternayan Persian wool for the whole piece. The background is worked in Leaf Stitch Filling in two shades of green. This is partly for a stylised jungle-like effect, and partly to echo the green damask fabric covering the furniture.

The reds, oranges, and browns pick up the curtain colours, and echo the Elephant Of No Distinction himself. The harness uses cashmere stitch variations, the saddle cloth is upright double cross stitch, and for some reason I can’t now recall I chose to use Byzantine stitch on the elephant’s ear.

The sides were worked with a Bargello rope pattern, but I had to fudge the final piece because I discovered the pattern wasn’t going to meet up – I hadn’t thought that far ahead when I planned it (if you can call it planning!). Almost everything I do has a slightly improvisatory element to it and in this case, I left enough space to put my mother’s name around the corner that wasn’t going to match. It almost looks deliberate!

I’m not displeased with him, but I would do something entirely different now, I think!