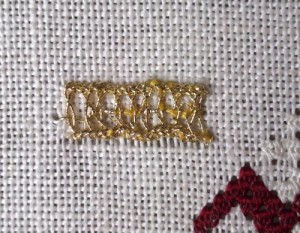 Interlaced Ladder Stitch In gold Thread on the Spot Sampler

I finished the silkwork on the Spot Sampler some time ago, but then ran into a problem, largely one of priorities. There have been so many other things I fancied trying, and so I’ve been working on the Amarna Map, the Christus Natus Est Panel, and a whole host of others.  I’ve also been feeling just a bit jumpy about the real metal threads, and wanted to wait until I was feeling settled enough to read the instructions and make sense of them.

I have at last made a start, though. I even managed to thread my Japanese needle with thread from the Real Metal Thread Pack that arrived in the post a few weeks ago. Perhaps the practice thread I was using was quite simply fractionally too thick for the eye of the needle.

I started with Interlaced Ladder Stitch – which wasn’t necessarily the best or easiest starting point, but it is area number one on the chart! I’m a little disheartened that the gold thread has broken up quite as much as it has, here, but I’m leaving it there for now to act as a basis for comparison as I do other stitches. I’m going to try using even shorter lengths, and maybe even use a stiletto or similar tool to keep loops open while I pull the thread through.