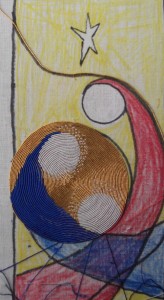 I’ve been making good progress on the Christus Natus Est panel. I’ve had to re-stretch the fabric, which involved taking out all of the pins, and reinstating them. The stitching is much easier again now!

I’ve reached the point at which I decided to end the spiral, which has gone over the outline I originally drew for the panel but now delineates the new left-hand edge. This is rather an important stage, since apart from anything else just following the spiral was an easy thing to do, whereas now – as the gold thread along St. Joseph’s back is hinting – I’m moving on to the part in which I need to create a flowing effect which is linear rather than spiral. The points at which the gold changes direction, and the way in which the lines run will make or mar the design, I think.

I’ve also worked a little more on the Christ Child’s halo. If you zoom in on the picture, I hope you will see that there is now a gap, an incomplete pattern in the halo where I’ve outlined it to come back and fill it in later. I felt it was more useful – and more important – to work out where the edge was to be than to keep the infill going. 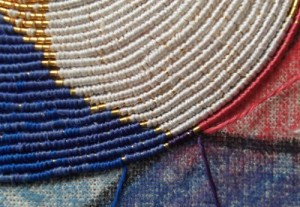 Close Up - All Colours

The close up shows the blue of the Virgin’s robe, the first hint of red of St. Joseph’s robe, and the combination of white and purple that represent the Christ Child. As someone hinted in the early comments on this project, this is a very addictive technique. I find myself trying to finish “just one more row” before the light fails, and muttering discontentedly when I have to stop.

It may even be finished in time to be used as the family Christmas card!