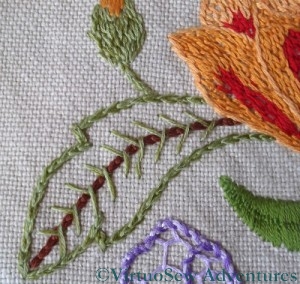 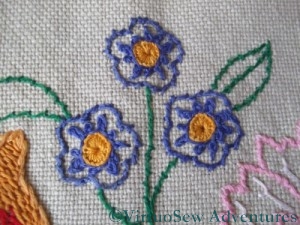 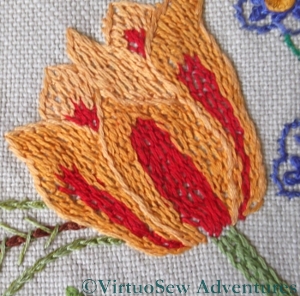 Did You But Hear My Lady..? 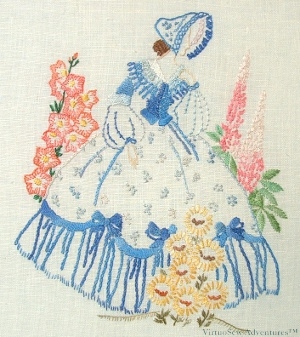 The Lady in the Garden, again came from a transfer, and was stitched as a companion to the Peacock, and a homage to Grandmama’s Lady. Unlike Grandmama, I made no effort to provide the lady with lovely graduated ruffles – if I am honest, because I really didn’t think I would finish them if I tried! Instead her dress is sprigged with flowers (in Sorbello stitch, which was rather fun!) and only ruffled around the hem.

Because I conceived of the Lady and the Peacock as a pair, I emphasised the flower colours around the lady, and worked some elements of her dress in one of the blues I used for the peacock. 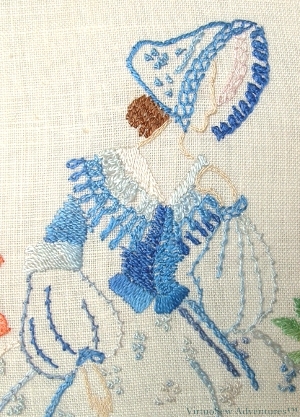 The inside edge of the bonnet is ornamented with Rosette Chain stitch, while the outside is edged with closed feather stitch. This would also have been an ideal opportunity to use bonnet stitch, but I didn’t think of it in time! I also used Rosette Chain Stitch for the ruffles on the the lady’s collar. I like to use a variety of stitches – the trick is not to use so many that the eye becomes bewildered. Using a basic stitch and its variations is one way to maintain some sense of uniformity, as is keeping a small colour palette.

The bodice is in Bokhara Couching, and the sleeves outlined in coral stitch. I’m surprised at how well this works – it should look thorny, and heavy, but somehow manages to evoke an airy gauze sleeve. How does that work? 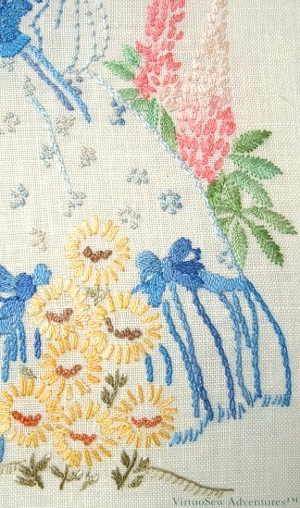 The bows above the flounce of the skirts are in satin stitch, and the impression of the flounce is given by lines of chain stitch. Almost all the visual weight of the dress is at the bottom, and the airy sprigging on the skirt allows the flowers to take some of the limelight.

Again the stitching is simple – fishbone stitch for the leaves, detached chain stitch and French knots for the flowers, and as almost all the threads were variegated, I got a lot of subtle – and not so subtle! – colour variation “for free” as it were.

I had already worked the Jacobean Fire Screen when I started work on the Peacock and the Lady, and was beginning to feel that I should do some more designing for myself. I will probably still use other designers’ work, because sometimes I want to concentrate on a particular thread or technique (as in the Tudor and Stuart Goldwork Masterclass) rather than the design. Besides, who knows what else I will find in the archives to write about!

The title of this post – for those who are scrabbling around in their memory – is the first line of “Silent Worship“, written by George Frederick Handel as an aria in his opera Tolomeo, but far more popular than anything else in it. Beware if you Google it – the last time I did so the first two links were for ringtones! 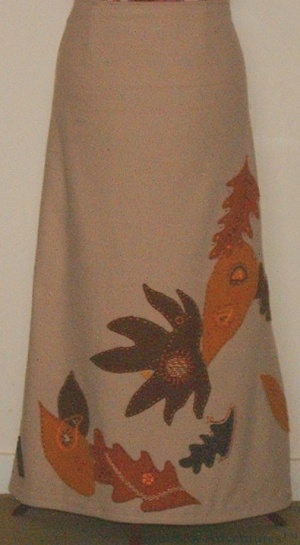 I made this skirt last winter, and originally needlefelted the leaves onto the fabric. However, after a winter’s wear, and after looking at a good few blogs over the summer, I thought I could do better.

I took some  ideas from some of SharonB’s Pintangle posts on seam treatments, fished some additional inspiration from a host of other blogs (wish I’d taken notes, now – I want to find some of them again!) and then proceeded to some adventures  in embellishment.

It occurred to me that there was no need to keep within the leaf shapes, or even to add embellishment that resembled leaf characteristics in any way, so paisley shapes, spiders web wheels and trailing lines of feather stitch showed up all over the place.

I started off by sewing around the edges of all the leaf shapes in ordinary running stitch, and originally I had intended to stop there. However, when I did, it looked a little half-hearted, and I’m never that, so Something Had To Be Done! 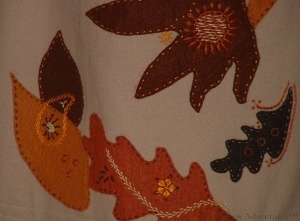 There’s a trail of French knots across the largest leaf, which has a circle of Rosette Chain on it, surrounding a disc of  an interlaced filling stitch in three different colours.

I also realised (about halfway through!) that I didn’t have to keep the embellishment only on the applied fabric, so the skirt fabric acquired stem stitch lines with French knot finials, a spiders web wheel, and more French knots. 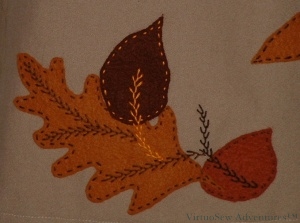 It is all worked in six strands of stranded cotton, un-separated to maintain a sort of cohesion. I chose colours that were fairly close to the colours of the felt leaf shapes, but working in the opposite direction, as it were, so dark felt was running-stitched in light stranded cotton.

All this on a skirt I originally made purely because I wanted a long winter skirt to cut the draughts in the office! 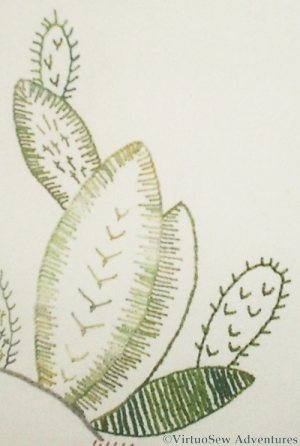 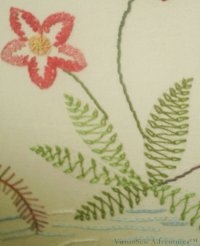 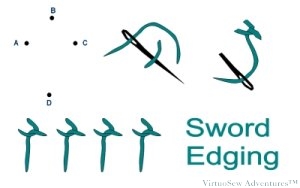