From Watercolour to Embroidery 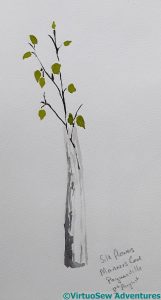 This vase of flowers was on the table in a motel room we stayed in, many years ago. For some reason they caught my eye, and for our whole stay – which was full of activity and outings – I wanted to paint them. But we were never in the room for long enough during the daytime.

Finally, on the morning we were going to leave, I got out my paints, sat down, stared very hard, and painted this. I’ve noticed that if I really want to paint something, it often works much better than paintings I’ve done because I want to practise painting.

I don’t think I even bothered to take a photograph. Everything I wanted to remember about the vase is in the painting.

When we got home, however, it seemed to me that the painting offered possibilities as the basis for a simple embroidery.

Embroidery based on the watercolour

A very simple embroidery, but, as you see, making use of a variety of stitches.

The vase was textured glass, not clear, and I represented that using lines of coral stitch among the stem stitch. I didn’t work it more densely, because I wanted it to have a certain lightness of touch.

The twigs were very rough and twiggy, so I used scroll stitch.

Finally, the simple shapes of the flowers were best represented using my neatest and most careful satin stitch. All I really wanted from them was the colour.

I haven’t the vaguest idea what to do with the embroidery, so I’ve laced it over a board to keep it tidy. But I thought you might be interested to see one of my very rarest stories – I know other designers often do detailed watercolours of their designs, but it’s not how I work. More often, I have a rough idea in my head, and work on each element while I’m planning the details of the next, waiting for the piece to tell me what it wants.

This has turned out well, but I’m still slightly bewildered that it happened at all! 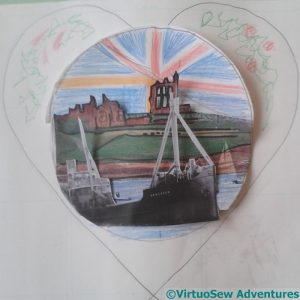 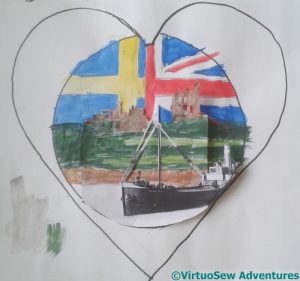 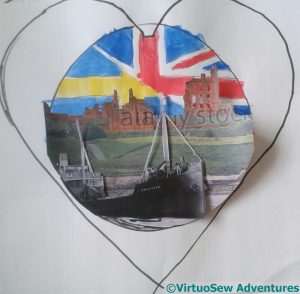 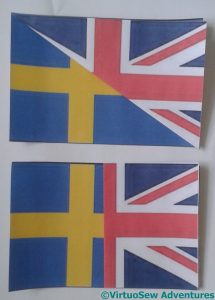 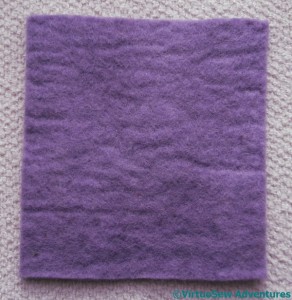 This post has its roots in some conversations I’ve had with friends who are involved in education and enrichment, and in our mutual realisation that, although we may have different words for it and although we may face it differently, there is an experience we all recognize, and which it is very hard to coach students through.

No matter what you are doing, there is always a point early in a project where you find yourself staring at a blank sheet, wondering where to begin, what to do, and how to approach the challenge. This happens in every field of endeavour, whether it is obviously “creative” in the sense of painting, embroidery, or sculpture, or in a more academic field such as mathematics (The Australian is a mathematician, so I know about these things, even though I’m not one myself). And it isn’t limited to beginners.

You stare at your blank sheet, mind racing – or frozen – completely overwhelmed. Everyone devises their own strategies to overcome this, and the sooner you find your own, the easier your life will be. 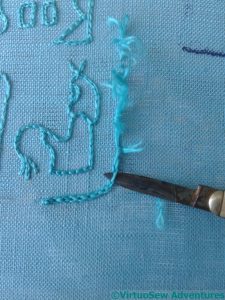 The first is to pick something – anything – and try it. I am coming to realise that one of the signs of not being a beginner any more is the willingness to do work which may be abandoned – unpicked, reverse stitched, torn up as leading down a blind alley. Sometimes you have to see What is wrong, and How it is wrong before you can pick the Right Thing.

Another very useful strategy is to create limitations – to lay down rules that limit your choices. The idea is that part of the reason you’re overwhelmed is that with so much you could do, it’s almost impossible to choose which. In mathematical or computing terms, what you need to do is restrict the search space. It might seem paradoxical, but when you restrict your choices it can become very much easier to make progress. So the strategy of making a set of rules, or creating a framework within which to make decisions (to write a sonnet, say, instead of blank verse), can help you get started. Once you’ve got started, you can then decide to break the rules if the effect will be better. The important point is that you’re now over the Fear of Blanks and into the flow of the project. 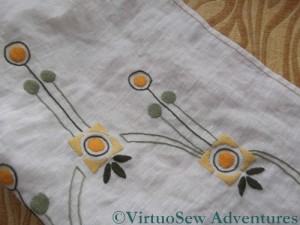 When I’m working on a new project, I have to make decisions about the design, the fabric, the colours, the threads, and the stitches. Some of those decisions may be made for me. For example, if the project is “domestic” – a table runner, a cushion, the cover for Maggie the Magnifier – then I know where it’s going, and the colours will have to work in the room in question. Or if I’m embroidering a garment I already have, I have no choice about the fabric, and very little choice about the threads. I don’t have to worry about those, and can spend my energy on design and stitch choice. 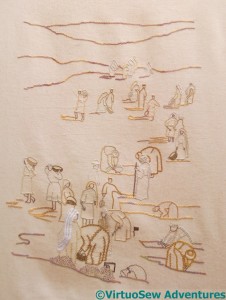 View Of The Excavation

But in the case of The View of the Excavation, for example, I had the design, but I then spent days – weeks! – staring at it and wondering what stitches and colours to use where.

I still had freedom to choose stitches, threads, and colours, but The Rules restricted the range within which I was choosing, and so made the decisions easier. Furthermore, because I’d picked a stitch and thread for ground features, I could get started, and think while I stitched, which meant that as I came to apply my various rules, the blank fabric was already no longer completely blank. 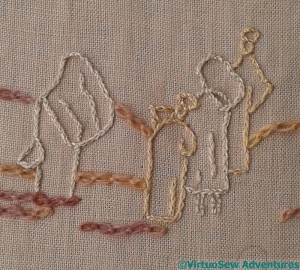 Each of the first two rules could be elaborated further, so for Rule One, I picked two different pale colours to choose between, and chose one stitch to use. Again, the decisions are thereby reduced and thus easier to make, which means that progress can be made while thinking about the next stage.

This is the manifestation in embroidery of one of the reasons that school maths can be dull and repetitive – it is trying to inculcate skills which will allow us to work mechanically on the simple stages or processes of a problem or puzzle, leaving the brain free to tackle to the more complex parts that will require serious, creative, and inventive thought. My sitting quietly working the “easy” bit while I think about my next step is exactly analogous to the mathematician rattling through some calculations while they consider what part of the problem to tackle next, or the writer writing a descriptive section while the back of their mind is busy mulling over the plot.

So next time you’re stuck over something, try this: pull some rules out of thin air and stick to them. Then break them. Thoroughly. And with enthusiasm!