Experiments for The Head of Nefertiti 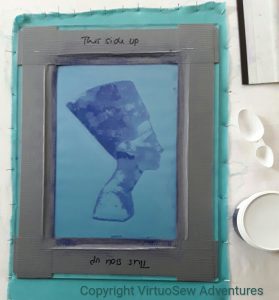 You may recall that the final “Dreams of Amarna” pair of panels is intended to include the heads of Akhenaten and Nefertiti, screenprinted onto gauze, and floating over the top as free-hanging veils.

I decided to have a small screen done of Nefertiti, in order to practice the technique and experiment with the different types of gauze. 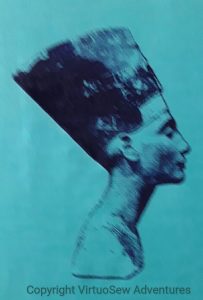 The screen duly arrived, and I did about six prints, all of which were dreadful. I put the screen away in disgust and decided to try another time.

This print shows some of the problems. I pressed too hard, obscuring some of the detail and caking the fabric – in this case a linen, because I have a plan to add silk and gold embroidered highlights. It would be impossible to get a needle through, and if I did, a metallic thread would be stripped in short order.

There’s clearly a trick to it – a combination of pressure (not too much), amount of ink (enough!) and angle of the squeegee (just right).

These two prints on gauze give me some hope. The orangey-terracotta is the small, blocky screen I bought to test out the idea first of all. I’ll embroider something over the top of this, just to see how it works.

And the head of Nefertiti is rather better, too. Next time I get out my Dreams of Amarna pieces to stare at them and play with layouts, I will be able to hang the gauze in front and play with distance and placement.

I’m beginning to think that it isn’t outside the bounds of possibility that I might finish the Dreams of Amarna one of these days, and even be pleased with it! 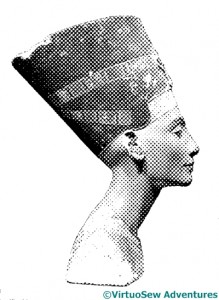 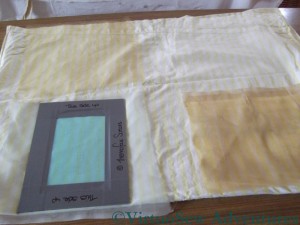 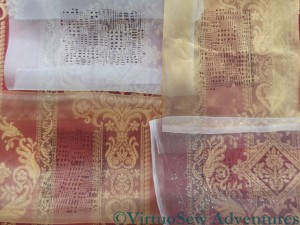 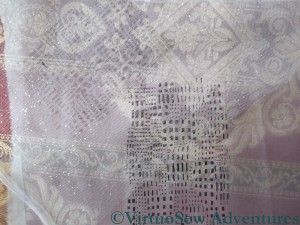