Beginning work on the Lotus Fragment

Home | Dreams of Amarna | Beginning work on the Lotus Fragment 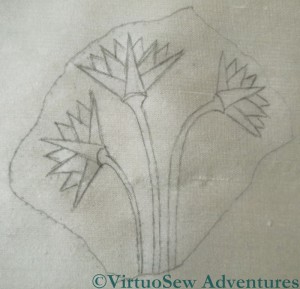 When I first wrote about the Lotus motif, in September (The Fragment of Tile That Started It All) it was because I wanted to buy materials for it at the Knitting and Stitching Show in Harrogate in November, which I duly did. And now that the Crock of Gold is finished, I can move on to the Lotus Tile Fragment! The colours I bought were soft and slightly greyish, rather than bright and clear, partly because that was all I could find, and partly because I was thinking more of the way Mary Chubb would have first seen the fragment, covered in dust.

However, just when I had got the design drawn out, I had a Dreadful Thought. 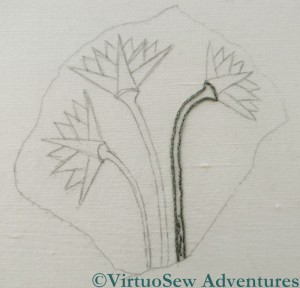 My intention for the final mounting of the two panels is to print a head of Akhenaten on a piece of gauze and stretch it in front of one of the completed panels, and a head of Nefertiti for the other. Just how fine and gauzy can it be and still create the effect I want of the Heretic Pharaoh and his Queen, brooding over the excavation of their city? How fine and gauzy a fabric can I find that will take a print? And how much brighter do the colours have to be to ensure that the jewel-like panels around the central panels shine like jewels, rather than being killed off by the gauze?

I shall finish this version, since I’ve started it, and I might, perhaps, need to begin learning about screenprinting, and experimenting with fabrics much sooner than I thought. If all the pieces I’ve worked so far need to be re-done in brighter colours, my current estimate will need to be revised outwards…