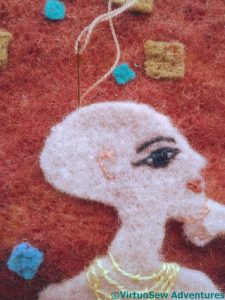 Sewing On The Princess

I decided that I would actually sew down the princesses. Everything else has been needlefelted into place, but the texture that creates, especially on a light felt, is a bit too regimented for the impression I want to convey.

I’ve very carefully, and as near as I can make it, invisibly, attached the felt around the edges, stitching into the thickness of the felt that makes the two girls and using a wool thread that is close in colour to the felt. 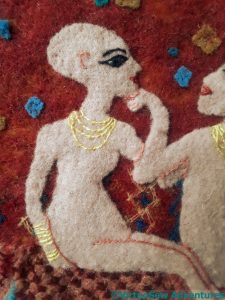 Ready For Her Close-Up

I then used a hand needlefelting tool and went just around the edges, and into the sections that are further back. I’m trying to create a slightly sculptural effect, so that the princesses have a slight roundness to them. Remember how, at the beginning, I said I wanted to recall the scene as the original fresco artist may have seen it, as well as recalling the fresco itself? 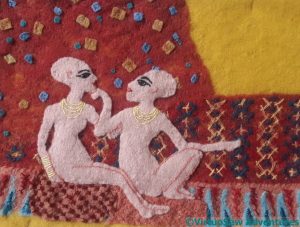 I’m rather pleased with my two little princesses.

I need to work a little magic in straightening up the panel and working out how to display it, as I think the three felt panels that I’ve done so far would all die if put behind glass, and may not even be happy in frames.  A question for another day.