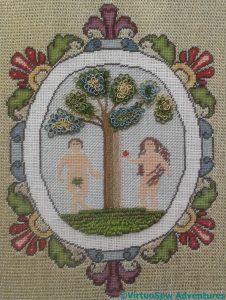 It took me quite some time – several weeks, in fact, before I got myself over my frustration with “Eve”, gathered up my patience and my courage, and had a go at the second lot of foliage.

The curls of gimp are a bit tighter, and more closely packed than in the first one, and the bunches of foliage are spaced out a bit to allow the branches to show through. There was a great deal of muttering, and I spread out the frustration by doing one clump at a time, then getting up and doing something else instead. 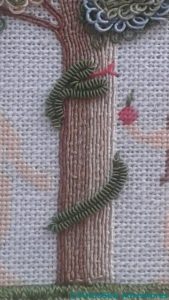 Naturally no garden of Eden can be complete without a Snake. In this case, using green silk pearl purl, carefully couched down in two sections to create the head (with flickering red silk forked tongue) and then the tail, to give the impression that the snake has wound itself around the tree.

I rather enjoyed the Snake (both of them!), because I only seemed to need the two hands I already have, rather than the three extra that seemed to be needed for the foliage! The silk thread used to couch the pearl purl also made a leaf for the apple.

And now I’m ready for the next stage… 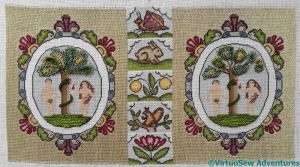