Foliage for Eve In the Garden of Eden

Home | Goldwork | Foliage for Eve In the Garden of Eden 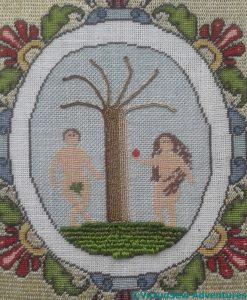 I Decided To Do The Sky

I really should pay more attention to myself. I have said before that trying to work around edges is work for fools, and that often it is worth doing more stitching than is going to show. In the end I decided to listen to myself and do the whole sky.

If I’d done that before putting the trees in, however, the stitching would have been less fiddly and the experience, less frustrating! 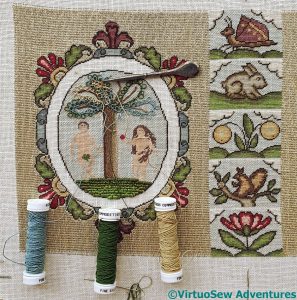 The next stage is to add the foliage, more silk gimp couched with Soie Ovale, but this time couched in little curls.

I had been looking forward to this, as it looked rather entertaining in the photos, but thus far I haven’t enjoyed it at all. I’ve got myself tied in some terrible knots, and I’ve ended up cutting the gimp more often than I like.

I need to rethink how I tackle this, look again at the photos and instructions, and try to work out why I’ve ended up with something that looks congested and floppy, both at the same time. I also need to work out, if possible, how to hop from section to section, rather than cutting the gimp.