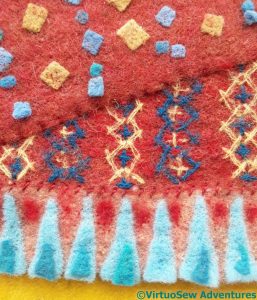 Having chosen my bits of drapery, I’ve stitched them together at the edges.

This means that they won’t move when I’m felting them to the background, and that I could actually cut off some of the second drapery, rather than overlapping it on the first. This will reduce the number of layers I will be felting through, which turns out to be a good idea. I don’t want any more broken needles, thank you very much! 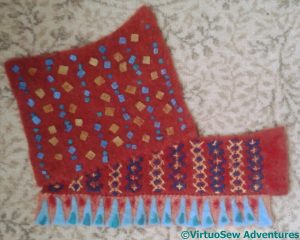 The assembled drapery now makes a rather peculiar shape, but it gives me part of the background for my princesses, and a basis for any further embellishment I may feel is necessary.

However, as I was contemplating that eventual embellishment, I found another source picture and now I have to do a little more thinking.