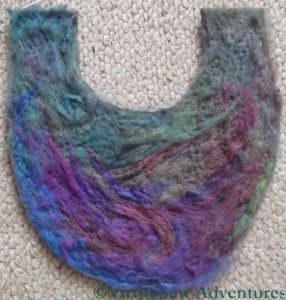 My brain really wasn’t working very well just before Christmas, and I found it hard to settle to some of my more challenging projects, like the Masterclass. Add to that, the fact that everything had to be cleared away before Christmas because my window for embroidering is also the window for the Christmas Tree, and you won’t be surprised that I found myself with fingers itching to do something, and no idea what to do.

Fortunately, I saw an idea (before I went to the Knitting And Stitching Show in Harrogate) in the magazine “Mollie Makes” for a beaded necklace of outsize sew-on gems attached to felt, and so having bought some materials there, I was ready prepared for the situation.

In the magazine the sew-on gems were black and white, which is all very classic and Chanel, but not my style – I like real colours in my clothes as well as my embroidery! I planned to wear the necklace with a rather difficult purple-pink dress, and since I knew that I wouldn’t be able to match the purple I got sew-on gems in gold, teal and white.  I used a grey pre-felt for the basis and then needlefelted onto it a layer of silk throwster’s waste in purple, teal and blue. It looks more purple and less blue in real life.

When I was trying to plan the arrangement of the beads and gems, I found myself over-thinking everything, so in the end I forced myself to make lots of arrangements very quickly and then photograph them. This meant that I could look over the photos, scrolling from one to another until I settled on an arrangement that was fairly pleasing and furthermore, I had the photograph to refer to when I started stitching. We’ve all become so accustomed to digital cameras now that it is hard to think how I would have tackled that before – I certainly wouldn’t have used a film camera because first, I am simply not a good enough photographer, and second, it would have meant waiting for the film to be developed.

I know a design tutor who says that the student who draws flowers from life will create a better design than the student who develops their designs from photographs, and I am inclined to agree – it is certainly the case that when I was designing counted cross stitch the designs I drew were better than the designs from photographs I scanned. However, in this case I was was using the camera as a sketchbook, and I think that that worked really well.