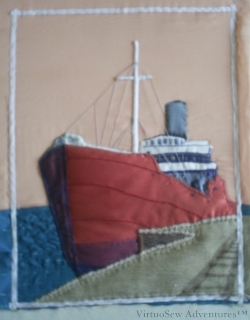 At last I could get started on the rigging.  I was hoping to get it right as far as it went, although I don’t imagine it is as complex as the real thing. The thread is a medium weight matte cotton thread in a mid toned grey. Essentially each piece of rigging is a single long straight stitch. The connections across the spars are made using a simple figure of eight knot, which interlaces across the spar. This creates the suggestion of a connection, without trying to give great detail.

I used some brown net to represent the shadows on the quayside (railings, I imagine, although the photo doesn’t give that much detail), and stitched another set of catching stitches just inside the quayside edge.

The cotton tape is simply there to give me an approximate idea of where the border is going to go, and thus the true extent of the design.

While I was doing this, I was also thinking – and discussing with my Client – the form that the border would take. We finally settled on a “Dedication” in Morse Code embroidered on to petersham ribbon.