Dreams of Amarna – Progress on the Map 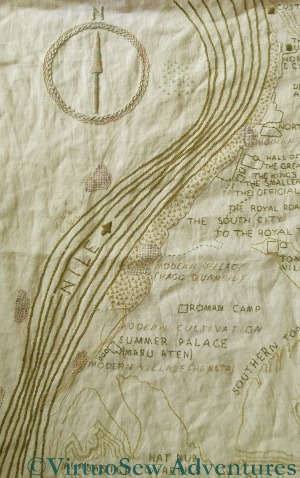 Progress On The Map of Amarna

You may recall that having worked most of the Map of Amarna, I then ran into a brick wall, and could not decide which thread to use for the last, rather extensive element – the depiction of the cultivation.

I decided, in the end, that I would use the more golden of the plain silk threads, but rather than spacing the stitches widely I would stitch quite densely, creating a sort of background pattern of tête de boeuf stitches. Then I began to worry that this would be visually too weighty and might even create the impression of a sort unlikely to be accurate given that in Mary Chubb’s time the villages were probably groups of smallholdings.. 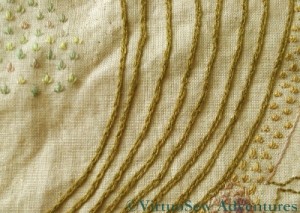 Patches On The Map of Amarna

The close up shot shows one of those patches already in place, with the single colour on the other side of the river and the modern village in a different variegated thread.

Or at least I think it will. It would not be the first time I’ve had a bright idea that really didn’t work when I tried it. I am prepared for the possibility that I will have to unpick all the variegated threads and restitch in a single colour!