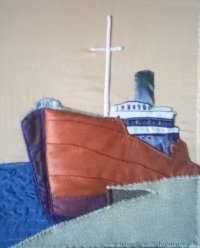 I ended up using both fabrics.

I decided to use a layer of the darker fabric to create the shadow of the face of the quayside edge, covered with a layer each of brown and navy net.

The two layers of net intensified the darkness of the shadow, but at the same time, suggested the roughness of the surface. The net was cut as fragments – not the same size – and the heavy material is cut to the same basic shape as the top layer, there were no lines  of fabric edges showing through.

The slip for the upper layer was outlined in buttonhole stitch and then attached over the top. At this stage I felt that some additional stitching would be be needed to create an impression of the quayside in similar detail to the ship itself but now the only fabric to be applied was the border.

Which at this point I still hadn’t yet decided on….!