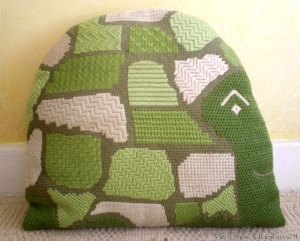 I worked this cushion from a design in one of the craft books Grandmama gave me (“The Book of Creative Crafts”, it was called, and it included woodwork, screenprinting and candlemaking as well as embroidery, needlepoint and rugmaking), but in my usual somewhat ambitious fashion, I did not restrict myself to a single side. 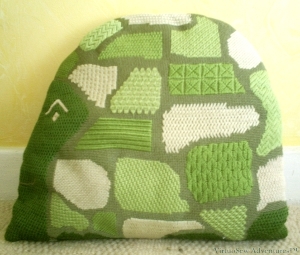 Slow And Steady Facing The Other Way

In some ways this made it easier, because the patches of stitching that represented the plates down the centreline of Slow-and-Steady’s shell had to be worked in the same stitch and colour on both sides. That at least meant that those decisions were only made once. I also decided that the shapes of the plates would be the same on both sides (approximately – they were drawn freehand!) and that the colour would be the same as well.

After that, I rummaged through every book on canvaswork I had, to find a sufficient variety of stitches to keep the work interesting. In effect it is a sampler, almost a practice piece, but camouflaged by making it irregular in shape and style. My favourite stitches pop up again – Leaf Stitch, Upright Cross Stitch, Linen Stitch, Byzantine Stitch. In fact this is probably where I met most of them for the first time.

I have a notebook in which I drew out the pattern and then listed all the stitches used, so that if I forgot how to work the stitch I would be able to look it up. I used Persian wool, rather than tapestry wool, and 14 gauge cotton single thread canvas. One thing I did not note down, and should have done, was how many strands of the wool I used for each stitch. I know they are not all the same, but I didn’t keep notes. That means that when I use these stitches in future,  instead of checking on my previous experience, I will have to work samples all over again.

Calling him “Slow and Steady” was my idea. I always loved the Just-So Stories.