A final look at the Piano Shawl 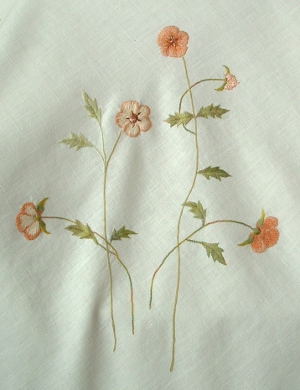 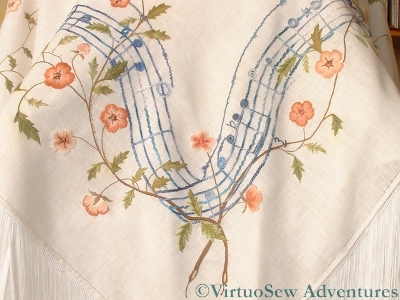 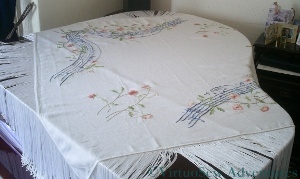 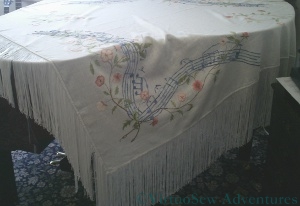 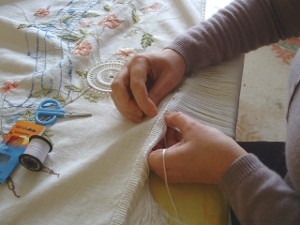 I’m in the very last stages of a very long running commission here. It’s one of the reasons my reading of blogs has been sporadic of late – I’ve been working very hard on this!

Anyway, the last stage is to add fringing all around the edge – some six metres of fringing, which is why it isn’t happening all in one go – although we will need the dining room table again soon (I don’t have a studio – I only wish I did!). And I am using the pins I won in a giveaway on Karen’s blog recently – thank you, Karen, they are working very well for this!

I’ve learnt a lot from this project about managing, planning and specifying a commission. In particular, unless you can be guaranteed no disturbances, life has a tendancy to throw in the odd curve ball and suddenly progress slows to a crawl. It took over a year to find a suitable fabric that my client and I both liked, and over six months to find the fringing. Fortunately I haven’t had a hard deadline – my client wants it finished suitably and not rushed. That makes life much easier!

I also discovered that I have a tendancy not to work on what I want to work on, unless I can put forward an over-riding reason why I should. “I’m being paid” works, but so does “I want to write it up for my blog” (now I have a blog, that is!) or “I’m learning something here”. What hasn’t worked – until recently – is “I’m enjoying it”.

Still, it’s within eyeshot of being finished, now. Another day on the fringing, and then I shall take some photos from the right side before presenting it to my client. I’ll post those after she has seen it!