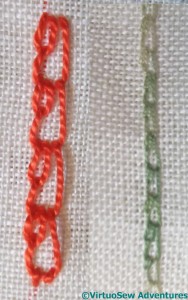 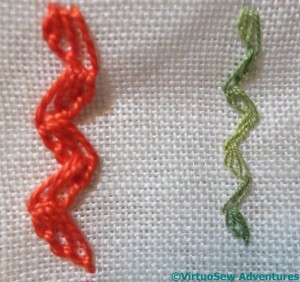 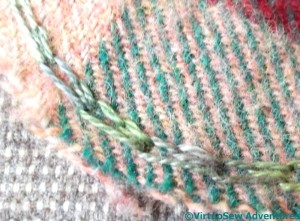 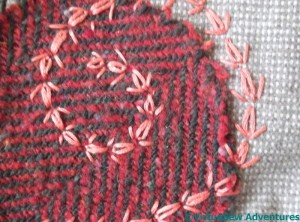 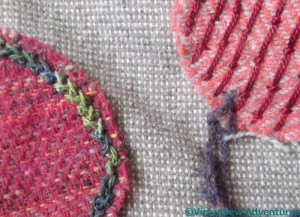 Naturally some of the threads I chose to use were from my extensive stash of variegated and over-dyed yarns. The Spanish knotted feather stitch running around the edge here is stitched using one of Stef Francis’s pearl cotton type yarns. This one has very little sheen, unlike the more standard pearl cottons, but the colour change brings up the texture of the stitch beautifully. I think this is the first time I’ve ever used that stitch, and I really enjoyed it.

I realised that I had fallen somewhat into the trap of stitching around the edges of the circles, and wanted to create some sort of variation, so when it came to the pinky circle, I added a layer of widely-spaced burden stitch to alter the colour and effect a little. Then I used ladder chain stitch to join that circle to another.

I continued the Ladder Chain across the skirt fabric and around the rim of another circle, spiralling around it and then into the centre. 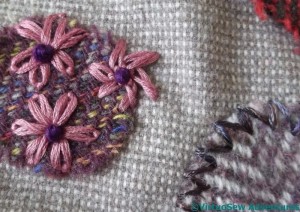 More daisies, this time on one of the smallest circles. I may add to the grouping in due course, but for now, there are just the three pinkish ones with dark centres, one of them falling off the edge of the circle.

The shiny rayon in stormy colours around the edge of the other circle is glove stitch. It was surprisingly hard to bend the stitch around the circle. I expected it would be easier, since with a name like “Glove Stitch” you would expect the stitch to be intended to run around fingertips, which are much more tightly curved than this circle!

There are a lot of circles to embroider, and since even though I’ve done a lot, I’m not sure I’ve finished, it will be some time before I show you the skirt complete. In the meantime, though, I’ll continue to describe some of the circles and the embroidered embellishment as it has developed. 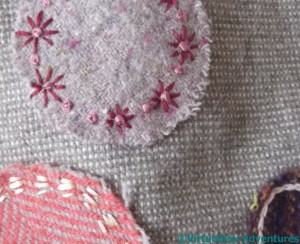 The light chain stitch around the edge of the darkest tweed circle looks a little stark, and I may have to do something else to break it up a little. Edith John’s various suggestions may help there!

The stranded cotton I used for the blocks of straight stitch on the pinkish tweed is actually too close in weight to the threads in the tweed, and at some angles in relation to the weave, it sinks in a little too much. I like the effect of the sheen of the cotton against the matte wool, but another time I might choose to separate and recombine the strands.

The lilac tweed shows what happens when you improvise. I started with a ring of French knots about half a centimetre in from the edge, decided it wasn’t enough, and turned alternate French knots into flowers with a ring of straight stitches. It turned out that I was one French knot short of a complete ring! 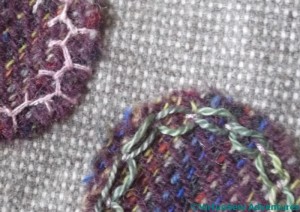 The small, dark tweed circles are predominantly at the back of the skirt, on the sections that flare out slightly. By and large, I’ve not done anything too dramatic in embellishing them, either. I want the patterning to reach all around the skirt, but it doesn’t have to be equally heavy or equally detailed at every point.

The cretan stitch is worked in a fine but quite rough silk thread. I liked the combination before I stitched it, but the silk thread wasn’t easy to work through the tweed fabrics, so I was very glad it was only a small circle!

The second circle is ringed with double interlaced running stitch using a medium weight pearl cotton. The pearl cotton sits up above the tweed, and the shine contrasts nicely with the matte silk thread on the other circle.

Embellishing the Circles Skirt – Part One

I have two books by Edith John, “Creative Stitches” and “New Stitches for Needlecraft”, and in the latter, she in turn quotes from another book “Needlework through the Ages” by Mary Symonds and Louisa Preece, who say

“It should be remembered that it is not the stitch itself, but the manner of its use which constitutes the art of embroidery”.

I’m going to have to think about that. I think – I would like to think – that in my embroidery the “manner of use” of a stitch is an important element of my approach, but I want to think a little bit more about the How and the Why of some of my stitch choices. It might involve a little more practice stitching, but since it’s the process of stitching that appeals to me as much as the finished result, that probably won’t be a problem!

Much of Edith John’s introductory text is concerned with encouraging experimentation – not something I need much encouragement in! – but one thing she does emphasize is the delight that can be gained purely from stitchery. The whole idea of this skirt is that it should look as though I had fun with it. This is probably not a project in which the answer to Why is likely to be anything other than Because. 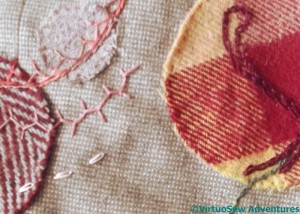 Some of the circles will be embroidered within their edges, some will have embroidered elements that extend beyond there edges, and some are ghost circles, linking several of the tweed circles together. In the top left corner of this first picture, you can see part of a series of concentric ghost circles, using solitary chain stitches, cretan stitch, stem stitch and half-chevron stitch.

The large checked circle is joined to a nearby one using some cable chain and twisted chain stitches, set out to suggest that the stitching is itself a stitch, running underneath the main fabric and onto the tweed. 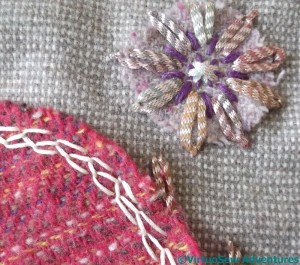 One of the smaller circles acquired a Lazy Daisy in chainette ribbon, with a couple of falling petals on the main fabric. I’ve emphasized the centre – a circular boss using the same chainette in star stitch – using a darker stranded cotton.

I’ve learnt over the past few years that sometimes a design is best created using layers of detail. The darker stranded cotton was added after I’d done a few other circles. I came back to it, and wanted to point up the petals a little. Since the tones are all very similar, the darker thread helps. I may yet come back and add some more.

The large crimson circle is very simple at present, with a single row of closed feather stitch around the edge. That may yet change…