Details to think about 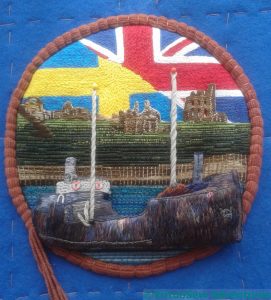 While I was working on the string padding and testing the placement of the vessel section, I was able to test the placement and height of the masts.

These are too high, but they are in roughly the right place, which is a step in the right direction, at least!

And, however much I may have wished to, I can’t simply use twisted cord. I’ll have to cover the masts with something… 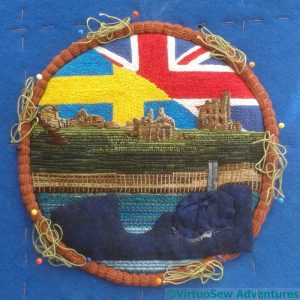 Leaving that point to ponder, I finished the string padding and removed the vessel section, leaving its shadow in place.  You may note that I’ve added a funnel, and a bit of extra padding for the deck cargo!

I want to weave a wreath around the rope frame, in such a way as to set off the ship, rather than argue with it. The green tangles of thread helped me to do so… 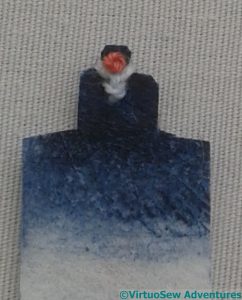 Finally, I had another hard look at the photo and realised there was a watchkeeper on deck.

So here he is: buckram painted with inktense, a French knot for a face, and a knot of white thread for his scarf.

I’m going to say that this is Great-Grandfather, on watch as his ship leaves the Tyne.