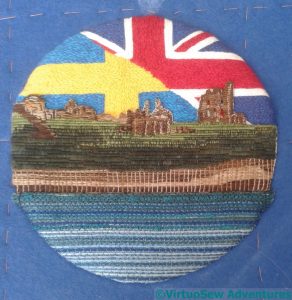 Once the sea was done, of course, it had to be attached. Again, a gathering thread, and tucking it around the edge of the buckram-and-padding base. That wasn’t too much of a trial,as it turned out, and once it was done, I could sit back and look at it.

I’m really quite pleased. There is a lot to come, but I think this makes a very strong start. In particular, the headland and the priory stand up well to the flags which could so easily dominate, and the sea supports both. Good! 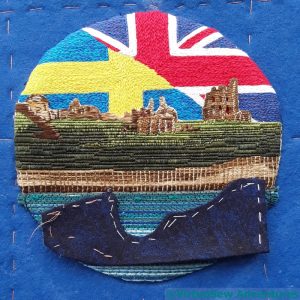 I want the vessel to be strongly raised, sailing out at the viewer, so before I attach the ship, I attached an underlayer, using wadding covered with printed cotton. It’s just tacked in place here, but you can see that I’ve set it to run out over the frame, when that is in place. 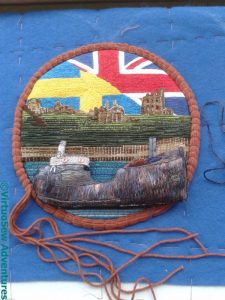 The preparation for the frame is underway in this picture. I’ve used several layers of string padding, and overlaid the ship piece to give a bit more of a hint of how it is going to look.

My idea for the wreath is to start off with raised stem stitch band, for the “rope” section, and then build on that base layer for the wreath. We’ll see how that goes…