Progress on the wreath 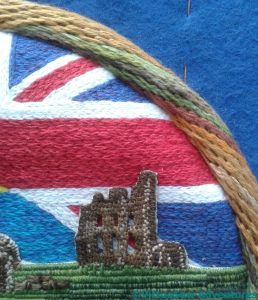 The last time I used Raised Stem Stitch Band, it was for the rim of the Crock of Gold, and it went around concentrically.

This time I wanted to create the twisting appearance of a rope frame, so there was a little trial and error involved in working out how to make it work. Here you can see that there are green sections (which will be under the wreath) and yellow sections with differing shades to help create the rope effect. It’s not the classical version that runs straight along the axis of the foundation stitches, but I think it has worked rather nicely! That’s a relief… 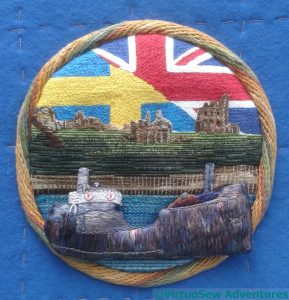 It is a little lumpy, perhaps, but the shades of thread do create some shaping in the rope section, and I think the wreath itself will help to enhance that.

You can begin to see that the weight of stitchery is making the fabric sag, in spite of the backing. It’s just as well I did back it! 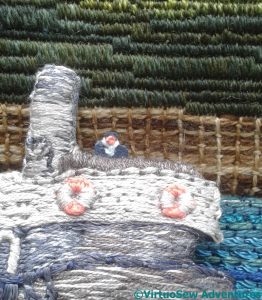 Another close-up, this time to show Great Grandfather in his place on the bridge.

He’s tiny, of course, and many onlookers won’t even notice him. But he’s there, the one human element in the piece, standing for all the hundreds of thousands of men and women involved in the war effort, military and civilian alike.

View all posts by Rachel
More on the Wreath, and Other Details →
← Details to think about