Beginning to think about assembly 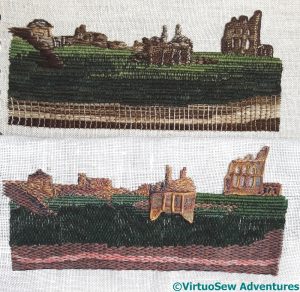 Here’s a direct comparison of Version One with Version Two – and it doesn’t help my decision making one bit!

That said,  when I put a similar picture up on Instagram and Twitter, the top one (version two), of which I had considerable doubts as I was stitching it, was overwhelmingly the favourite of those who responded. 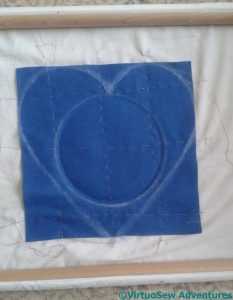 So while I continued to think about that, my next step was to attach the fabric provided for the heart shapes to a backing fabric and draw the shape on it, together with the circle for the roundel. Since the fabric supplied is only just big enough, and there are going to be many layers to my appliqué, I want to ensure that it remains stable and controlled during the layering. Attaching it to a backing fabric and then stretching the backing fabric in a frame seems to me the best way to achieve this. It’s also a very good use for the remaining “good” section of a lovely cotton sheet I had put my foot through! 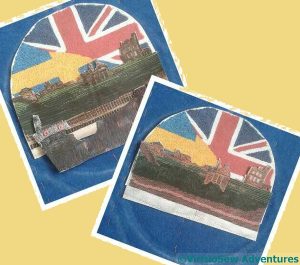 I made photocopies of the flag sunrise, the headland, and what I have done of the ship so far, trimmed them close, and made an unwelcome discovery. Neither the flag sunrise, nor either headland was quite as wide as I wanted them to be, which is a little worrying when you consider I could have sworn I used some form of measurement!