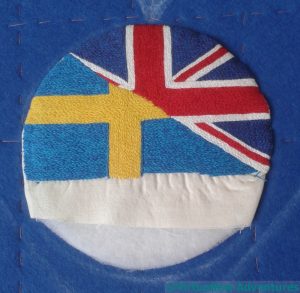 Once I had extended the flag sunrise -by nearly half an inch in all directions, just in case – I ironed it, and then ran a gathering thread around the curve. I’ve cut a circle of heavy buckram and another of wadding, and stretched the flag sunrise over the top.

Before I tried to attach it, I flattened it very thoroughly, and trimmed away as much of the excess fabric as I could. Then I fitted it into the circle I’d drawn on the backing fabric already, and stitched it down. Since there will be a frame around the outside, the stitching doesn’t have to be invisible, but as a matter of pride it does have to be neat, even and the next thing to invisible…! 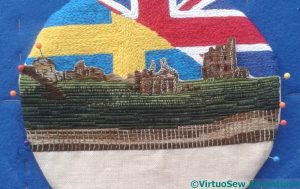 The next stage was to add the headland. This didn’t happen all at once, because the first thing to do was to remove the sky. Since there are a variety of edge treatments here, some of the fabric was folded back, and some of it was simply trimmed very closely.

It took two days of stitching time, and it drove me completely mad with frustration! 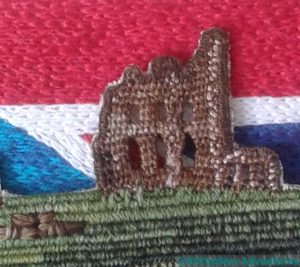 Flag Through The Windows

However, one element which worked exactly as I hoped that it would was the ruined priory’s windows. This is version two of the headland, and the ruin hasn’t been wired. I just invented a way to keep the windows open as I was doing it. Removing the fabric behind this square inch (barely) of needlelace took nearly as long as the rest of the sky put together, but it was worth every minute, and every quiver of anxiety as I pulled threads away.

Just as I hoped, you can see the flag sunrise through the windows!