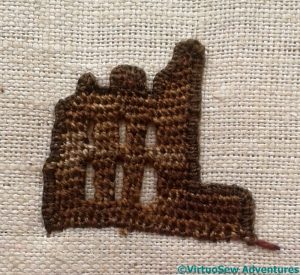 I haven’t wired this, and I have worked the buttonhole stitch facing outwards to make a firm edge. I’m planning to cut away a section of the fabric to allow the windows to be windows…

The thread is silk, again, but a heavier thread this time, and I have tried a slightly different approach to the windows that conceals the edging a little more. It seems clunkier, but it might stand up to the “flag sunrise” a little better.

Again, a slightly different choice of materials and stitches, and when I went back over to add my extra layers of detail it was specifically using the photograph again. I hid version one away where I wouldn’t be able to see it!

I became a little worried at this point, because the slightly heavier stitching, and the fact that my dark colours were darker, made the whole thing a bit spotty, especially at close quarters. But of course, I was worried at the same point on version one, so I decided I would have to keep going. 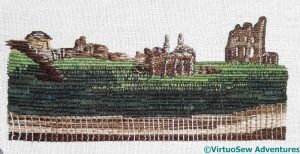 So I did – the grass used trammed and then untrammed satin stitches in rows, and then the cliff face, after much thought, I worked in Bayeux Stitch. With the variety of tones and layers, it looks less cliff-like, but more stitched, which I think is a good idea.