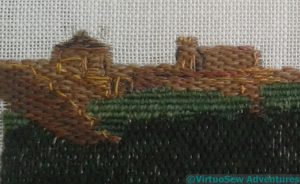 The result of all this staring and stitching is that I have layers and layers of stitches built up, creating details and changes of tone and colour. It’s surprisingly hard to do, partly because looking requires so much concentration, and partly because all those layers of stitching start to become difficult to stitch through (this is probably no surprise…).

After much staring and stitching, and the addition of a cliff face in a variant of Brick Stitch, I decided that the best thing to do was to tack the needlelace into place, and take a good hard look at the result. 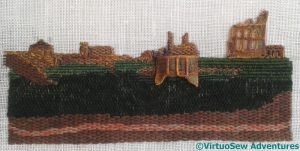 I expect to add other details during the assembly phase, so the fact that the joins between the needlelace and the main piece are so obvious isn’t something that worries me. I rather like the raised effect of the needlelace – it might even create tiny shadows through those windows

Something does worry me, however. The stone is very yellow, which is not only inaccurate, but may argue with my “flag sunrise”, and the whole thing may fade into the background more than the “heraldic” feel of the piece would dictate. It’s surprisingly hard to anticipate from a skein what will be the overall stitched impression created by a thread – the choice of stitch and the orientation of that stitch can both affect the result, even before the possibility of selecting the parts of a thread to use (wasteful, I know, but sometimes magical!)

Suddenly I can see myself working a Version Two….