This year Meredithe and Anne have come up with the idea of managing “Significant Progress” on six old projects or Works In Slow Progress, with room for six entirely new ones – because we all know how easy it is to be completely knocked for a loop by a shiny new project or sudden obsession with a new technique! – and have called the project “6 and 6 in 2018“. I wasn’t a very organised contributor last year, and I probably won’t be this year, but I do intend to try!

For the sake of accountability, here are my “old” projects: First of all, “Eve In The Garden of Eden”. This means constructing and covering the box. That in turn implies the use of glue, which as I’ve mentioned before, makes me very nervous indeed. It will probably take some effort to get up the courage to tackle it at all! Secondly, the Nefertiti Shawl. It’s such a lovely cheerful colour that I want to be able to wear it, which should be incentive enough, wouldn’t you say? 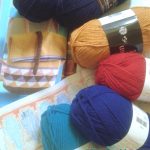 Thirdly, the Amarna Backpack. I’ve made a fair bit of progress here, and I’ve learnt a few useful lessons, but I want it to be useable, and preferably lined, by the middle of the year. Fourth, the Christmas Angel. It really is simply a matter of getting it set up so it is convenient to tackle this one, but of course in terms of work to be done it has strong competition, from number five. Fifth, of course, is Akhenaten. I’ve put him away over Christmas and missed him terribly, so I have a strong feeling that he’s going to send the rest of them to a distant second place! Sixth isn’t really a single project, but rather the crystallisation of ideas which are already bubbling in my head, like the Faience Necklace, and the beginnings of ideas for the Vision of Placidus. There are some that need to be out on paper for the next stage of mulling over. Anything that helps with that will make this year a huge creative success!