More Goldwork for Eve In The Garden Of Eden

Home | Goldwork | More Goldwork for Eve In The Garden Of Eden 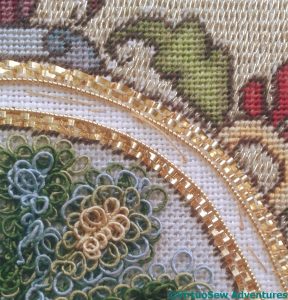 The next stage in the goldwork cartouche frames for Eve in the Garden of Eden was to add a row of very fine gold pearl purl inside each double row of the crinkle strip. Now, this doesn’t need a stitch in every gap – it’s more like a very fine, very tight spring, and follows curves quite well – but it is quite fiddly and concentrated, and there’s rather a lot of it. Fortunately I did each cartouche individually, so I had a rest from pearl purl while I tackled the next stage…. 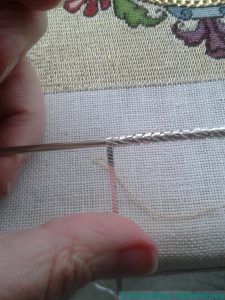 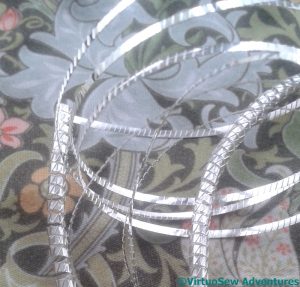 Here you can see the texture of the Wrapped Silver Strip. I think it is engraved or embossed, rather than actually wrapped, but it does add to the general variety of response to light, and that, after all, is part of the reason for having metal threads on an embroidered piece….

You can also see how the effect is enhanced by twisting the strip into a spiral!