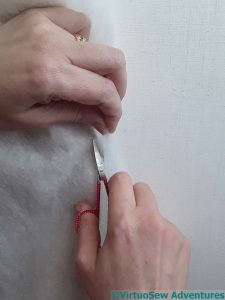 I did say the next bit was scary!

I undid the stitches holding the silk and top layer of wadding to the calico backing, and cut away the polyester wadding close to the back stitches outlining the figure. Quite apart from the fact that I had to tie myself in knots to follow the edge around, particularly around the neck and shoulders, and beneath the arms, I was terrified of cutting through the backing, or the padding I didn’t want to cut, or, worst of all, cutting through the silk.

If you are of a nervous disposition, do not attempt this technique. Try something soothing instead. Like base-jumping. 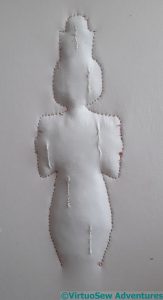 View From The Back

The next bit was hardly less scary.

Having been terrified of the prospect of cutting any of the layers, I then had to cut slits in the calico at the back, in order to stuff the figure more firmly.

I’ve had occasion in the past to express my conviction that holes into items to be stuffed actually open into the Fourth Dimension or something. The capacity of the item to be stuffed always seems to be higher than is suggested by the measurements.

And guess what, it happened again. I’ve done my best to stuff evenly, using small pieces of stuffing, but I won’t be at all surprised to find that after the next stage (whatever that turns out to be!) I will be doing more of it.