Adding Goldwork to Eve in the Garden of Eden

Home | Goldwork | Adding Goldwork to Eve in the Garden of Eden 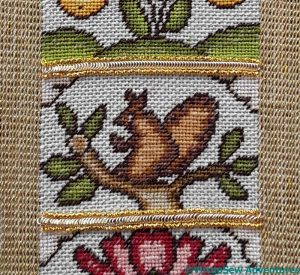 Once the foliage and the snake were done, I could start on the goldwork.

First, the spine. Each gap between the polychrome panels was filled with three rows of metal threads. The middle one was silver wrapped around a gilt strip, and the two outer ones in each case were of a very fine check purl. This last was very fragile, and if I had realised in advance just how fragile, and how inclined to catch on cuffs, sleeves, and threads, I think I might have worked the spine last. 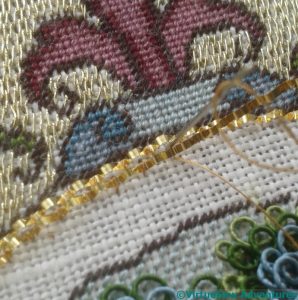 The goldwork around the cartouches began with four rows of Gilt Crinkle Strip, two couched around the outside of the frame, and two around the inside.

The instructions said to place a couching stitch in every valley of the crinkle, which was certainly necessary – it doesn’t willingly follow curves when it is couched flat – but I might not have thought to do without instruction. It makes for a wonderful effect, if rather visually confusing when you’re working it, because the hills and valleys of the crinkle strip bounce light every which way, in a rather delightfully dazzling fashion…

You might think, by the way, that this is fairly straightforward and done in no time at all. You’d be wrong! That Gilt Crinkle Strip looks lovely, but my word, it has a mind of its own, and being very springy and having lots of little corners to catch, it makes a spirited attempt to tie itself in knots. A third – and even fourth – hand might have helped!

View all posts by Rachel
Akhenaten – the scary bit! →
← Starting On Akhenaten