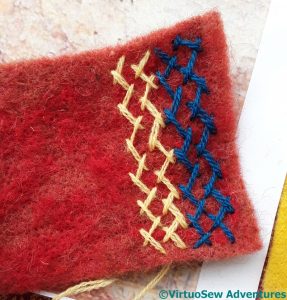 For my next drapery experiment, I began by using the embellisher to add some of that divided felt onto another piece – do you see that the red is in patches, a dark pink (the background) and a rather brighter scarlet? That worked  well, I think, as it has warmed up the colour, and made it more interesting.

I had decided that I would stitch a pattern and then use the embellisher to make it blend in a little more, but once I’d worked this pattern of herringbone stitch stripes, I sat back, stared at it, and said “No”. 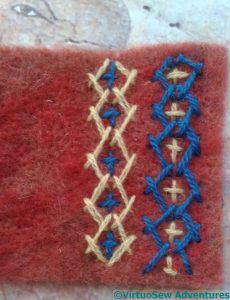 So the second pattern I tried was a little more complex. It’s still worked largely in herringbone stitch, and the colours are the same, but this time I’ve reversed the second row to create a series of lozenge shapes, which could then be filled in, after a fashion, with little upright cross stitches.

I liked this much more, so I decided to go with this pattern.

Although, of course, I was referring to the picture that was my original spacing, that red is very reminiscent of Persian carpets, and the combination with blue and yellow is one which we still find in widespread use. 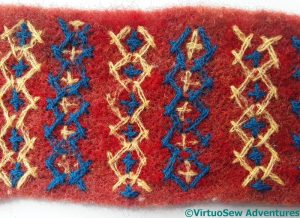 The next stage was to use the embellisher again. To begin with, I covered the stitching with a layer of net, and worked an initial pass of small circling movements, up and down each stripe. Then I removed the net and kept going.

As you can see, the stitching is almost melting into the background. Certainly it’s a more convincing representation of a piece of fabric than my first piece of drapery, although I will be using both.