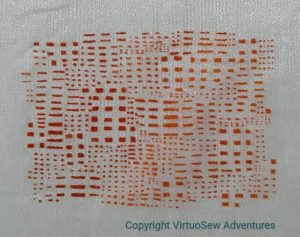 I decided, as I stared at the printing of this blocky pattern onto gauze, that I wanted to use the transparency of the gauze as part of the finished effect.

I don’t have a destination in mind for this piece which will give me a theme, so I decided that, in order to highlight that one quality, I would use a single thread (as it happened, a variegated silk), and design a fragment that would allow me to experiment with the effect of stitch cover and openness.

I leafed through books about pattern, saw nothing that gave me the combination I wanted, and then evolved the fragmentary organic sketch on the far left to give me the balance of line and form I was looking for. Incidentally, this is quite possibly the swiftest and shortest progression of any sketched design I’ve ever come up with! 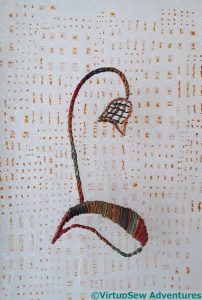 It’s astonishingly difficult to trace a design onto a fabric which is essentially invisible, and still harder, I might add, to follow the lines when you have finally put them there!

A qualified success, I’d say. The printed pattern doesn’t create a shadow, and the Jacobean trellis shadow isn’t a sort of half-depth.

But, my goodness, the shadow of the stem and the leaf work exactly as I hoped! The gauze itself almost disappears, leaving the printed pattern floating above the surface, and the leaf and flower thrown forward by their shadows.

View all posts by Rachel
Another Worktop Bin →
← The Head of Nefertiti, Embellished with Silk and Gold