Finishing the Form Cushion – Stage One 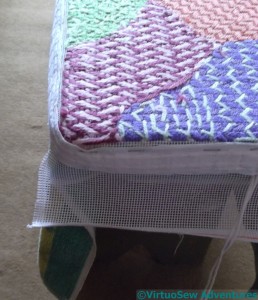 Corner of the Form

When I’d finished the stitching of the canvaswork for the Form Cushion, it was a little puffy and warped, and badly in need of blocking, but being long and thin I had nothing suitable for blocking it on. Until I had an inspiration – use the form itself!

We covered the form with an old towel, and then worked on alternate sides of the form. I’ve put an old length of cotton curtain header over the canvas, so that when I come to remove the staples, it will be fairly easy to do.

It took quite a lot of heaving and tweaking, and the combined efforts of my mother and myself (for a client, she’s having to put a lot of effort in here, isn’t she! – she’s started on renovating the form too.), but in due course we managed to get the canvas firmly attached, and stood back to look at it. 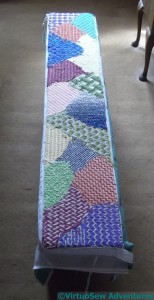 It didn’t look nice and smooth as it does here. It was bumpy and lumpy, and not very happy at all.

So I steamed it gently, using a steam iron but not letting it touch the wool. Very, very carefully, and slowly..

It started looking a great deal better (even upside-down), but then we set it aside, still stapled in place, for a few weeks. We wanted to be sure that it was very thoroughly dry before we moved on to actually making the cushion.

And besides, I’m not entirely clear on the type of cushion it will be!

View all posts by Rachel
The Head of Nefertiti, Embellished with Silk and Gold →
← Three Rabbits – or are they Hares?