The Red Panel on the Nefertiti Shawl – Part Three 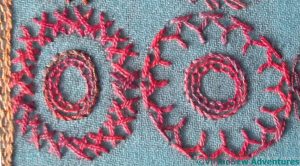 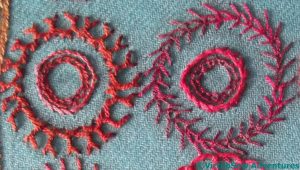 The first of these is Breton Stitch, which is a little like Herringbone stitch with added twist. I’m sure I could have done it with the twist towards the outside, but I think like this, it will balance some of the other circles which have a strong edge.

The second is Wheatear Stitch, which I have found myself turning to every now and again, although maybe not often enough. It produces a spiky but continuous line, so while it has definite uses, it is also one which doesn’t work in all contexts. That  said, I enjoyed working it, so maybe I will be able to tweak either the context or the stitch, so as to use it more…!

This pashmina is going to be quite the stitch sampler, isn’t it!