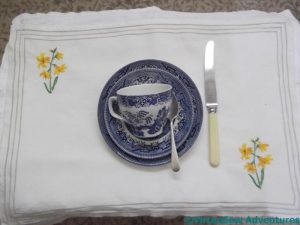 So here is the completed traycloth, laid on a convenient tray and assisted by the hand-me-down cutlery (from my grandparents) and the hand-me-down Willow Pattern (from my cousin).  We were very entertained (and very pleased for them!), when going around a stately home last year, to find that Willow Pattern was the servant’s hall crockery, although I don’t know quite why. 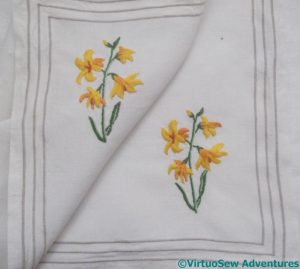 I didn’t attempt to stitch the two motifs identically. The original sketch of the patterns didn’t look identical, and to my mind that form of perfect repetition is overrated in any case. This shot also shows the machined “satin stitch” border, of three very narrow bands. I suspect they may be padded in some way because the bands are very heavily ridged. 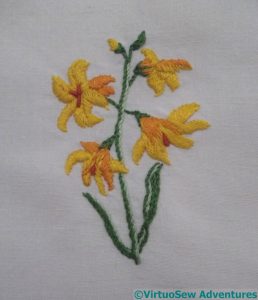 I chose to use very few colours – a yellow, two oranges, and two greens. The stitchery is simple, too, stem stitch and satin stitch, with bullion knots for the stamens. I don’t much like doing bullion knots (a holdover from early attempts) but sometimes they are simply and unarguably, the right stitch for the job.

They didn’t take long, and the completed traycloth does have a very cheering look to it!