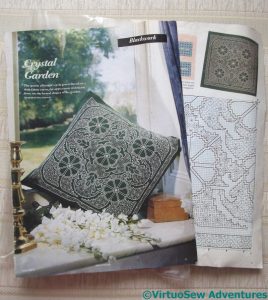 Remember all those frames? And the teacloth? And “Co-operation is better than conflict“?

There’s been a bit more tidying up going on, and this appeared, ready prepared and kitted up. Presumably by the very same lady – or, given what embroiderers are like, possibly acquired from someone else who’d decided not to do it after all. I’ve found all sorts of half-completed needlework projects on Embroiderer’s Guild stalls!

The design was in a copy of “New Stitches” magazine, but heaven knows how old it is.  At least eight years, because we’ve had it tucked away that long! 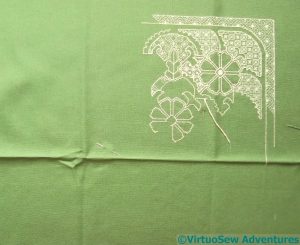 There’s not much of it done, so one of us will have plenty to keep themselves occupied with.

In spite of Topsy, my mother is talking about taking it on. She’s much better at counted work than I am, so I’m likely to leave her to it, although I must admit it does look rather charming, and blackwork is a style I’ve yet to tackle! 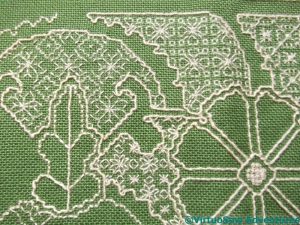 Look at all the different stitch patterns here! So intricate…

If ever either of us gets this finished, I’ll be sure to let you know…