Sampler Tool Case – the stitches in the sampler

The whole idea of the sampler on the case is to have a few reminders of stitches I haven’t done before, or use only rarely… 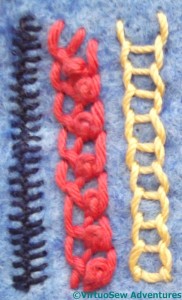 The first row was Fishbone Stitch in navy blue pearl cotton. I wanted something definite to create the edge of the panel. It was a little tricky to stitch on the soft pre-felt, but as I soon remembered – that would be true of all of them!

Next, Mountmellick Thorn Stitch in reddish-pink cotton. I’ve only used this once before, on the Jacobean Work Panel, largely because I have not found a suitable application. I enjoyed it, though, and now the stitch will be before my eyes more regularly, maybe I will find one…

Open Chain Stitch is an awkward stitch. In Barbara Snook’s “Embroidery Stitches”, she says it is best used as the basis for further ornamentation, such as single chain stitches across the bars. and I think you can see why. I used a pale yellow pearl cotton. I like the thread, but the stitch is one that needs more work! 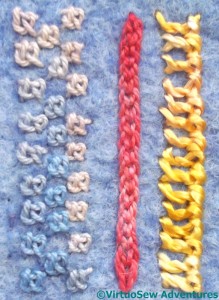 Next, Sorbello Stitch, worked in overdyed blue mercerised cotton. I’ve used this stitch before, to work the modern villages on the Map of Amarna, but at this larger scale the form and texture of the stitch is easier to see.

Hungarian Braided Chain Stitch has become one of my favourite stitches since I used it for the Silken Crane and the Antelope Frieze. This version uses an overdyed pink/red pearl cotton. It does show colour variations nicely!

Bonnet Stitch is a new one for me. I am absolutely sure that yellow rayon is not what the stitch was developed for, but it worked rather well, and I enjoyed it. 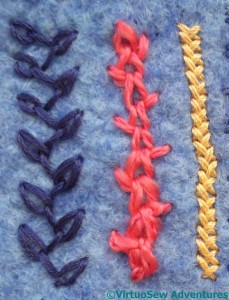 I chose Feathered Chain Stitch next because I wanted something fairly wide, and fairly open. The navy stranded cotton makes a strong central axis for the panel.

Petty Chain Stitch is a new one for me. I found it in one of the books by Edith John that I have. She named it after the student who created it by accident when she confused the instructions for two stitches – immortality of a sort, I suppose! I’ve used a pinkish wool slub, doubled to even out the thickness. I’ll try to remember to use this again, in a less textural thread. I think it could prove useful.

The Herringbone Stitch, I chose because I wanted something narrow. You will have noticed I’ve tried to create a rhythm of stitch widths, although it isn’t a repeating pattern as such. The golden pearl cotton has a lovely shine. 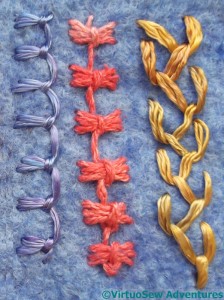 Up and Down Buttonhole Stitch is another old friend. The challenge with this blue overdyed rayon floss was not in the stitching, but in wrangling the fifty or so metres that joyously tangled themselves as soon as I untied the skein!

I’ve never used Butterfly Stitch before, either. I’m not sure that the textured pinkish cotton does it the best service, but it creates an interesting effect.

Feather Stitch is harder to stitch well than you might think. The de-twisted gold rayon cord certainly didn’t make life easy, but it helps create an emphatic stop at the end of the panel.