Stitching “Typed on Camelback in a Sandstorm”

Home | Dreams of Amarna | Stitching “Typed on Camelback in a Sandstorm” 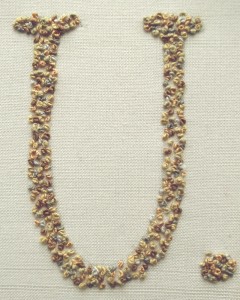 The whole idea of this patch is to recall an incident that Mary Chubb describes, in which sand adhered to a freshly-typed page, creating “a rather pretty embossed effect”. In the end, I chose the grid reference of the Expedition House, where the team lived during the digging season.

I used a selection of silk threads from Mulberry Silks, from a colour family called “Old Cotswold”, which I’ve also used for the panel showing the Crock of Gold Hoard. It included a russet, a mid-grey and a very pale greyish-white as well as several sandy colours.

I used all of the colours this time, and discovered that the threads are not all the same, some being finer than others.  That’s perfect in this case – some of the grains of sand would be finer than others, and I could accentuate or reduce the differences by using more or fewer wraps in my French Knots. I think it looks really very sandy indeed!

U.25.11 Typed In Camelback In A Sandstorm

It took a remarkably short period of time. And what’s more, considering that I’m not really a fan of French Knots (I never could get the hang of them when I began embroidering), I rather enjoyed it. Although I must admit, it was beginning to get quite tricky, what with all those layers of thread. I swapped over to a sharp needle and even that was a struggle!

And, as a bonus – an animation. This was put together by Simon Walters (@cymplecy on Twitter), using some photos I provided. I’m impressed with what he produced, considering that I didn’t take the pictures in a very controlled environment, and it will give you some idea of the view I had as I built up the effect, colour by colour