Progress on the Crest for the Dig

Home | Dreams of Amarna | Progress on the Crest for the Dig

The goldwork on the Crest for the Dig went rather quickly, and I found myself running straight into a brick wall. I narrowed my background choices down to two, and then stopped. I’ve even extended the patches of trial background, and propped the frame up to stare at. 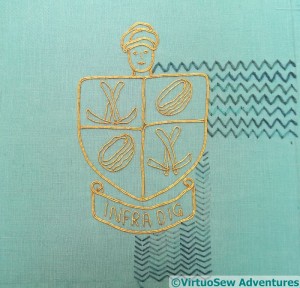 The arrowhead stitches create a subtle effect; patchy ripples, almost here-and-then-gone-again. Rather like Amarna, in fact – it’s thought the city was inhabited for less than thirty years.

On the other hand, the pearl cotton cloud stitch variation is more reminiscent of the rippling paint pattern that originally inspired me. The variegated thread helps to stop the background pattern from being too solid and monolithic.

In fact I took the frame to my parents’ house, last time I visited, and said plaintively “Help!”

We stared at it, talked about it, and finally decided that the pearl cotton variation on Cloud Filling Stitch is the way to go. It’s more in keeping with the idea of the doodle that inspired this design, the thread is closer in scale to the scale of the gold thread, and it’s also a better reflection of the ripple pattern I want to bring to mind.

I’m also considering how I’m going to edge the panel of stitching. At the moment, my ideas include lucetted cord or a flat kumihimo braid. The lucetted braid might be too narrow, but on the other hand I’ve only ever done one piece of kumihimo braid, so that would be rather a leap into the unknown!