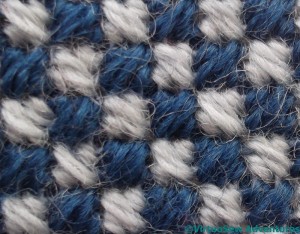 Section five needed to be worked in something that would help to calm down the acid green of section four.

I chose two shades of blue, and Reversed Mosaic Stitch, which at this scale is a small, neat pattern. The dark blue stitches are at ninety degrees to the light blue ones, hence the term “Reversed”. It also echoes to some degree the orientations of Brighton Stitch in the very first section. Just as in good script writing for a series, odd references may be made to incidents several episodes in the past, in designing large pieces of embroidery, references of colour, style and stitch help to give some cohesion to the overall item. 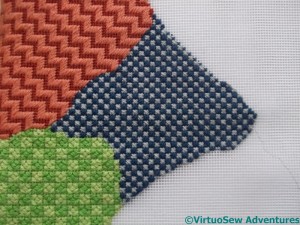 I am a little concerned, in fact, that this pattern has calmed everything down too much, that it is looking rather grey and dull – which in turn means I need to take some time and effort to pick the next section, both stitch and colours.

I have even braced myself (reluctantly!) for the possibility that when the whole thing is finished and unrolled, I may look at this section askance and rip it out! 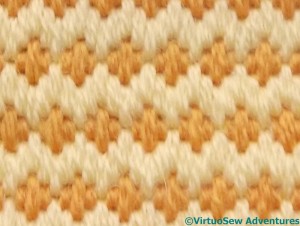 Moving on to Section Six, I wanted to choose a warm colour again, to counterbalance the warm colours of the Jacquard stitch, and eventually picked out two shades of warm yellow for the Hungarian Grounding Stitch. This is one I have wanted to do – I haven’t the faintest idea why! – ever since I found it, but have never had the right project to put it in. It’s a particularly useful one because it’s stripy, but at the same time spotty, so it reflects and recollects several different stitches. 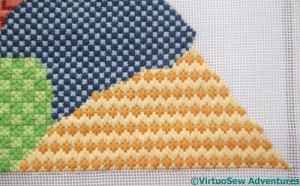 Seen from a distance the effect is stripy rather than spotty, but since the finished cushion is probably destined for my mother’s studio, it will be examined close up as well as from a distance!

The next pattern I choose will be much larger, and involving more colours.  I am now far enough towards the centre to move on to the more multi-coloured sections, for maybe four sections before moving back to two colours.  Some heathering will be involved, as well. Although my stash seems extensive it’s completely unstructured, being the leftovers of several of my own projects as well as inherited bits and pieces, and heathering will allow me to extend some of the colours to fill the elements I need them to.