Dreams of Amarna – a Crest for the dig

Mary Chubb recounts in “Nefertiti Lived Here” that on the first evening that they were at Amarna, John Pendlebury doodled a coat of arms for the dig. She tells us that he had something of an enthusiasm for the medieval period, and when I was a teenager I was rather a heraldry enthusiast myself, so that little story struck a real chord.

The key elements in a coat of arms are the shield, the crest, and the motto. 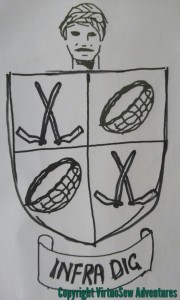 The crest was a Gufti’s head. The Guftis were expert excavators and overseers, people from a particular village, originally trained in excavation techniques by Flinders Petrie, who passed on the knowledge and the career from father to son. As I discovered in the BBC4 programme about Petrie, “The Man Who Discovered Egypt“, the Guftis are still in demand in Egyptian archaeology today, which is very good to know.

The motto – suggested by Mary herself – is “Infra Dig”, which I take as a very bad pun. They’ll be digging below the surface, of course, but the term would more usually be taken to mean something like “Beneath Our Dignity”.

On the shield, first and third quarterly, Pendlebury placed crossed touriehs. The tourieh was a sort of mattock, used to pull back the sand  into a basket propped up against the digger’s legs. Second and fourth quarterly, he placed a basket.

Eventually I intend to stitch the crest design in couched gold onto one of the dark teal corner panels. As it is such a simple design it would be a good one to do while I’m planning something else, but unfortunately I’ve not quite worked out what size I want it to be!

I’ve prepared my sketch using drawing apps on my tablet, and I’m really quite pleased with the result. Although I have moments in watercolour that are really successful, I’m not as good with line as with form, and the Gufti’s head, drawn from one of the photos the Egypt Exploration Society provided, turned out much better than I expected!

View all posts by Rachel
The Latest on the Glittering Nightcap →
← .. And Treat Those Two Imposters Just the Same